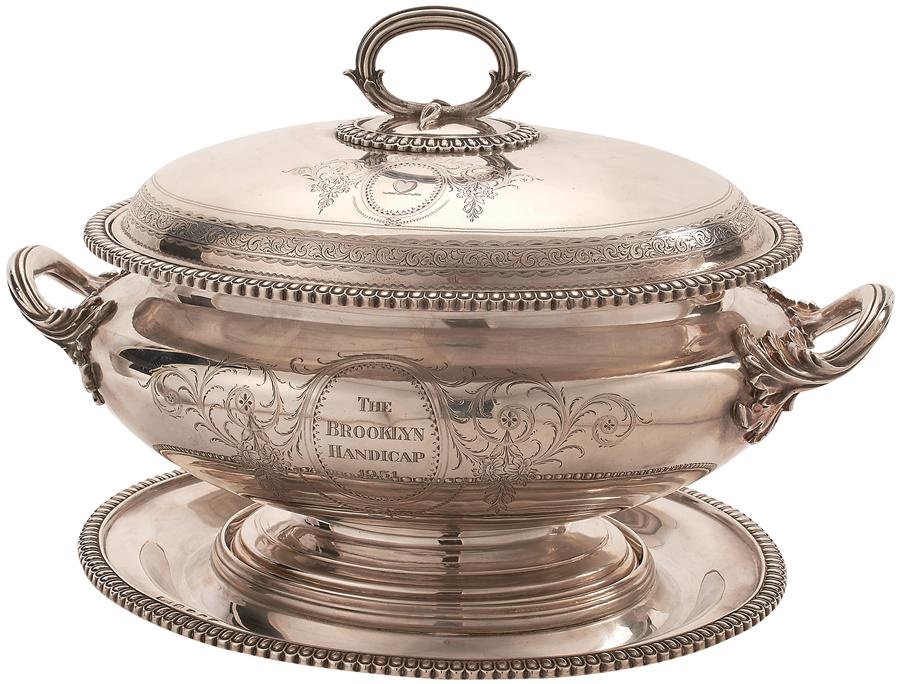 On July 14, 1951, a packed crowd of 32,271 fans gathered at Aqueduct and witnessed Palestinian win the Brooklyn Handicap, one of the more meaningful races, with famed past winners including Seabiscuit, Kelso, Buckpasser, and two Triple Crown winners. Palestinian was in fourth place for most of the race, but made the final stride to cross the finish line the victor. A smashing Victorian silver trophy tureen, this is engraved "THE BROOKLYN HANDICAP 1951" on one side, and "Won by Palestinian, Owner Isidor Bieber" on the other. The tureen is oval on pedestal foot with recessed oval stand featuring a gadrooned border. Comes with a cover with ribbed handle, body with bright-cut engraving and two crests enclosed in oval cartouches, marked on the stand, body and cover. Measures 14" long over silver handles and weighs 95 ounces, and carries the mark of "Elkington & Co., Birmingham, 1856." For a few years, it was common to use pieces of old silver in lieu of modern for a few prestigious races in the US. This 1856 trophy was designed by one of the most important names in English silver, famed for its excellence in artistic quality and fine design. Purveyors to the royal families of Europe in the mid-19th century including Queen Victoria, they held Royal Warrants for Kings Edward VI, and King's George V & VI and even supplied flatware for the luxury dining sections of the Titanic! Originally from Christie's Important American Silver Auction, 1/17/2008. Incredible quality with separate lid and bottom tray measuring 9x14". Condition: the only flaw is a tiny indentation which could be easily repaired, otherwise NRMT. Nearly as valued as an important piece of silver as well as equine.