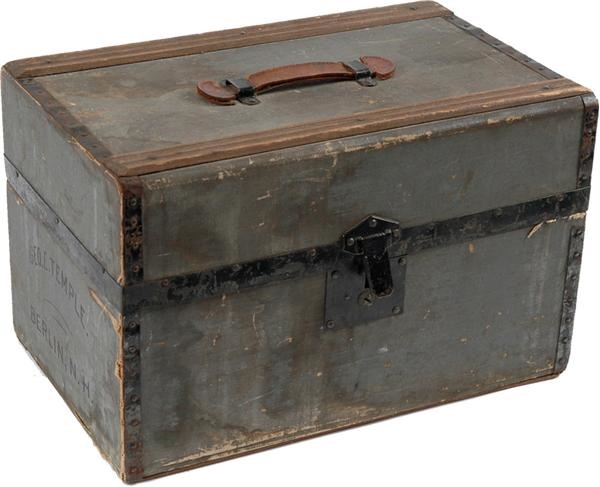 Scarcely seen and spectacular trunk of wood, metal and cloth construction bears significant black painted stenciling on its back panel that reads, "Capt. G. Temple 7th U.S. Cavalry Ft. Rice Indian Territory", with additional, "Geo. E. Temple, Berlin N.H.", on the side. American history buffs will recall that the 7th Cavalry marched under the command of George Custer and battled alongside him during the Little Big Horn massacre. Trunk itself is technically VG with its original leather handle still intact. A look inside reveals a "PCS MASS" cavalry flag made of braided metal and a velvet type material attached to the lid with some news prints. Within the compartmentalized bottom lie the contents of George E. Temple, all dating from the 1860's to the 1880's. Included are: a CDV of Temple taken in May of 1863 (he is dressed in Union garb as he also fought in the Civil War), two of his leather military belts with brass clips, eye glasses, pocket watch, small family photo album, small tintype in case, straight razor, 1873 Diary with financial notes, 1870 Harpers Magazine, tassel from his military uniform and pair of unused epaulettes. Contents average VG in condition. A fantastic piece of American, and more specifically frontier, history.