1881 Triumphs of America Hand-Painted Autotype by W.H. Tuck - Only One Known 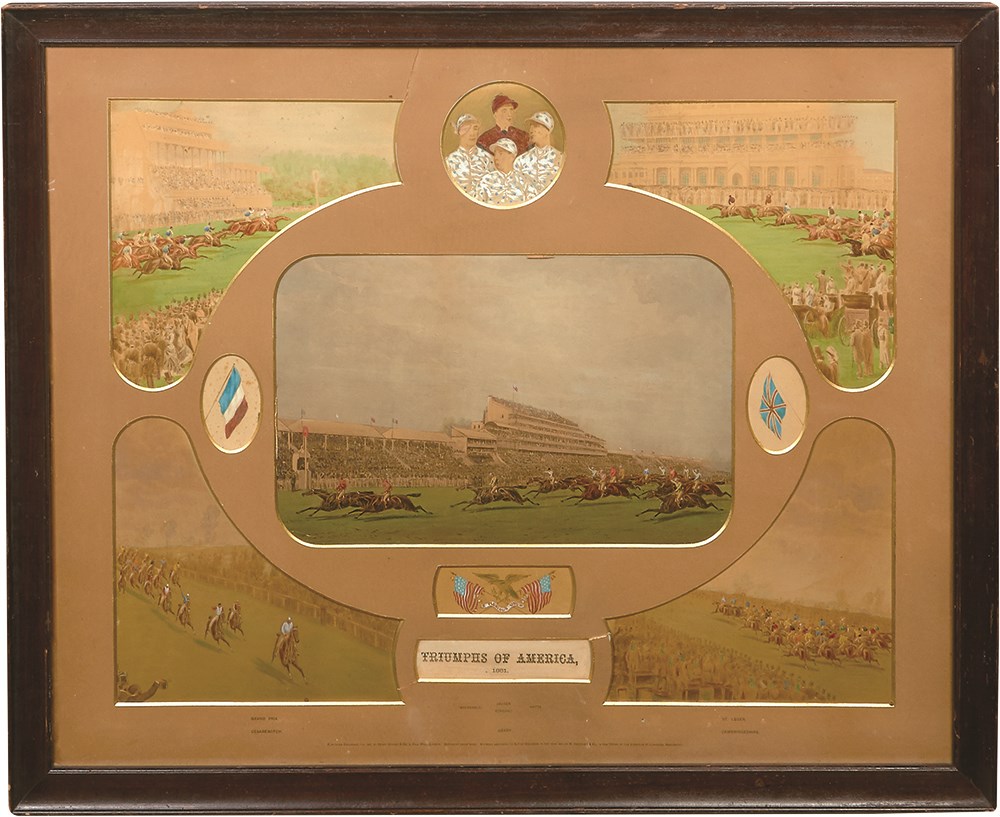 1881 Triumphs of America Hand-Painted Autotype by W.H. Tuck - Only One Known

<p>Exceptional quality, this hand-painted autotype print celebrates the emergence of American excellence in the international horse racing scene in 1881. This was a game-changer that forever stole the dominance from the Europeans and created the monster of American and Kentucky horse racing. Iroquois, bred by Astrides Welch (namesake of the first Kentucky Derby winner Astrides) and later purchased by tobacco magnate Pierre Lorillard IV of baseball tobacco card fame, became the first American-bred thoroughbred to win the prestigious Epsom Derby in England and went on to win the St. Leger Stakes. The legendary James R. Keene of Keeneland immortality, would go on to create one of the most important breeding operations in the history of American horse racing. His horse, Foxhall, became the first American horse to win the Grand Prix de Paris, then the most important race in France, and later won England's Ascot Gold Cup. These events and this piece are akin to the pilgrims landing on Plymouth Rock. Created in England for the American market, this was published by Great Britain's master engraver and printer Henry Graves of London, but marketed by the prestigious and pioneering American art gallery M. Knoedler &amp; Company. The autotype is a unique and rarefied engraving process initially conceived and delicately hand-painted by the master English 19th century artist W. H. Tuck. Featuring his trademark series of hand-cut mattes showing a variety of separately placed images, works shown include: The Derby, Le Grand Prix, St. Leger, Cambridgeshire, and Caesarwitch. A unique presentation right down to the original cover glass, which is thicker than the norm. So rare not even a specimen exists in the legendary Keeneland Library, Smithsonian, as well as a record of all museums in the U.S. as collated by the MET; not one has this piece. An iconic piece in the realm of Kentucky thoroughbred racing history. The art work to the extreme outer edge of the matte itself measures 25 3/4&rdquo; x 32 3/4&rdquo; and to the other edge of the frame measures a whopping 28 3/4&rdquo; X 36&rdquo;.</p><a href="https://books.google.com/books?id=3TQFAAAAQAAJ&amp;pg=PA105&amp;dq=1881+henry+graves+w+h+tuck+triumphs+of+america&amp;hl=en&amp;sa=X&amp;ved=0ahUKEwjjnZTk0YbUAhUEwiYKHYiHDWsQ6AEIKDAA#v=onepage&amp;q=1881%20henry%20graves%20w%20h%20tuck%20triumphs%20of%20america&amp;f=false">Click Here For More Info</a>