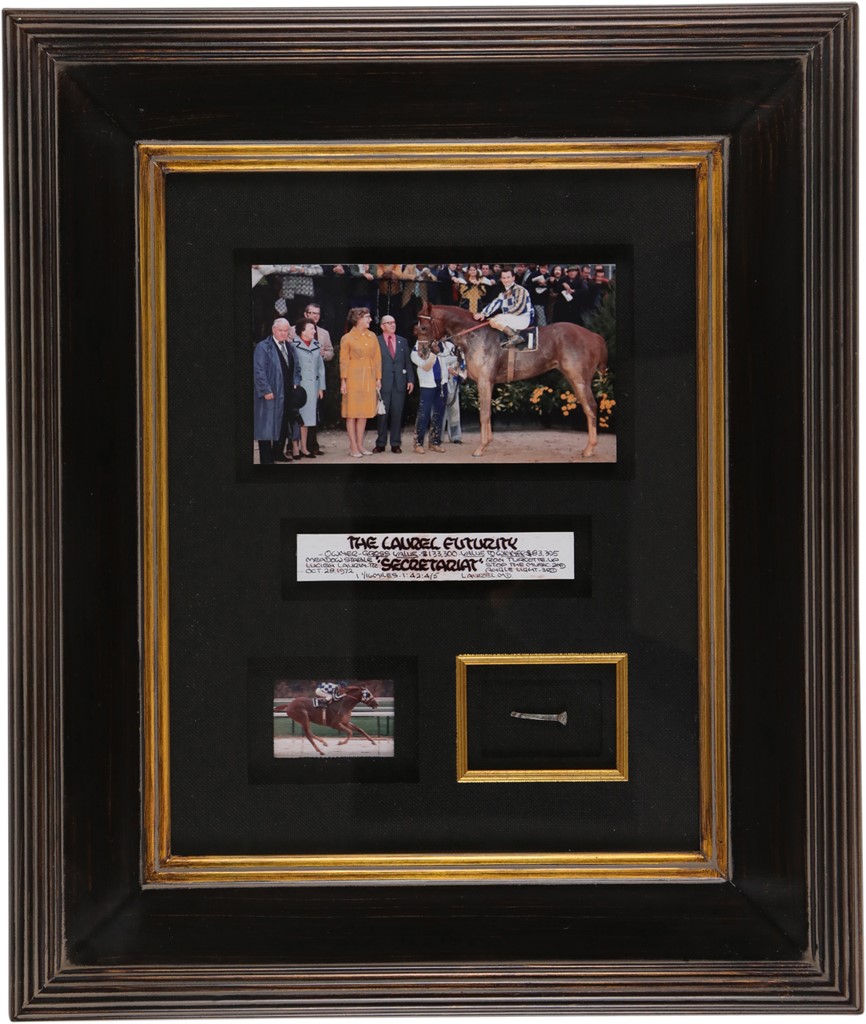 In 1973, Secretariat became the first Thoroughbred racehorse in 25 years to capture the Triple Crown. Today, original authenticated artifacts associated with the superhorse remain among the most coveted and collectible pieces within the category of sports memorabilia.This historic nail, emanating from the personal collection of Secretariat&rsquo;s exercise rider Jim Gaffney, comes from the shoes Secretariat wore during his juvenile season in the Laurel Futurity. The Oct. 28, 1972 Laurel Futurity was the event arguably marking Secretariat's finest juvenile race. Besides the impressive victory, many other "firsts" took place that day that are of historical merit including his largest margin of victory (eight lengths) and richest purse earned ($179,199) to date. The Laurel Futurity, run in Laurel, Maryland, marked Secretariat's first venture outside the familiar confines of the New York Racing Association tracks. It also marked his first exposure to the conditions of an off-track officially listed as "sloppy" - an anxious moment for the connections of any untested 2 year old. Finally, it marked the first stakes pairing of Secretariat with his trusted groom Eddie Sweat, who would become the constant companion to the chestnut champion through the duration of Secretariat's racing career. But the Big Red flame handled each of these new experiences to the win 1 1/16 mile race in grand style with a time of 1:42 4/5, just 1/5 off the track mark despite the miserable conditions.The Laurel Futurity nail, was originally obtained by the late Jim Gaffney, who served as the exercise rider for the Meadow Stable and was an integral part of Secretariat's the day-to-day activities in 1972-1973. His experience with Secretariat is chronicled in both William Nack&rsquo;s book, &ldquo;Secretariat, The Making of A Champion,&rdquo; and Raymond Woolfe&rsquo;s book, &ldquo;SECRETARIAT.&rdquo; Working with groom Eddie Sweat and regular Meadow Stable farrier George Collins, Gaffney collected many of Secretariat's racing nails - meticulously cataloguing each as the colt was routinely shod. The nail was obtained in the fall of 1972, when Secretariat was re-shod after winning the Oct. 28 Laurel Futurity (sometimes called the Pimlico Futurity at that time) at Laurel Park in Maryland. Interestingly, Secretariat also wore the same shoes and nails in the Oct. 14 Champagne Stakes, a race in which he finished first, but in a controversial call, was disqualified for interference in the stretch.The authenticated nail, one of only a handful to exist - each individually cataloged and part of an official registry - has been kept in protected storage and continuous possession of either Mr. Gaffney or the Secretariat Archives since its original acquisition. Accompanying the nail within the elegant linen-matted gilded frame are Laurel Futurity photos of Secretariat racing and in the winners circle. The framed piece measures 20 " x 17" in total.Optional:The provenance and rarity of the nail makes this a wonderful investment opportunity for any serious sports memorabilia collector. A previously Lelands auctioned nail from Secretariat's 1973 Belmont Stakes fetched more than $28,000. The historic significance of the nail cannot be overstated as Secretariat remains a most beloved and iconic name in Thoroughbred racing and whose legacy has transcended the sport.