1972 Secretariat Horse Shoe from His Maiden Race AND First Win 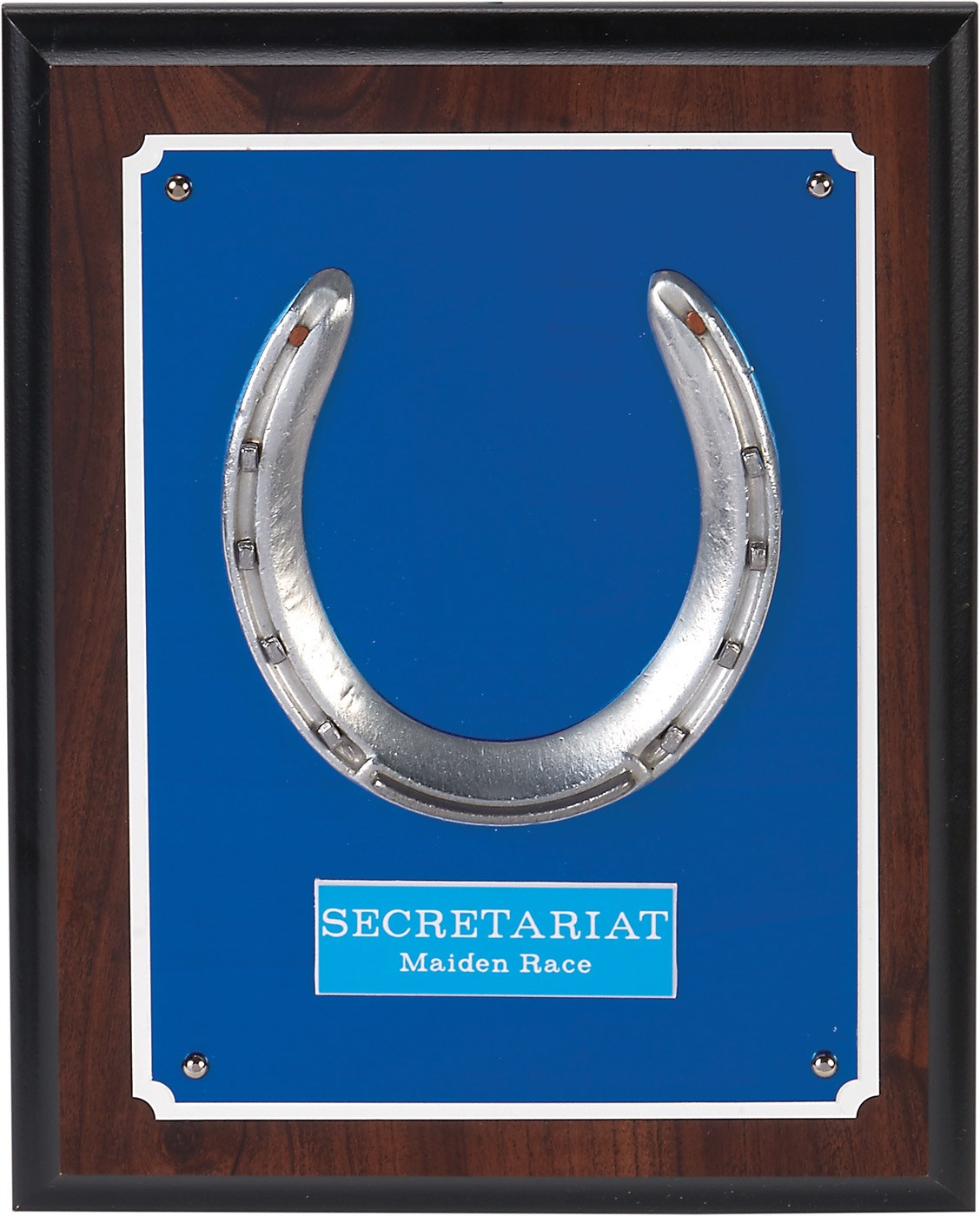 1972 Secretariat Horse Shoe from His Maiden Race AND First Win

<p>The bat Babe Ruth used to hit his first home run, the basketball Michael Jordan used to score his first NBA basket, and the jersey Jim Brown wore to score his first NFL touchdown, all have one thing in common. Sadly, they have all been lost in time. Here, however, is a chance to own a once-in-a-lifetime object in that same class. We present the horseshoe Secretariat wore in the same races: 1) In his maiden race on July 4th, 1972 at Aqueduct. 2) And on July 15, 1972 also at Aqueduct in his maiden win. Mounted on an attractive plaque made by the immortal Jim Gaffney, who was Secretariat&rsquo;s regular exercise rider from April, 1972 through May, 1973. Mr. Gaffney was intimately involved with the day-to-day activities of Secretariat for over 13 months and his experiences with Secretariat are chronicled and verified in William Nack&rsquo;s book, Secretariat, The Making of A Champion (1975) and Raymond Woolfe&rsquo;s, &ldquo;Secretariat&rdquo; (1974). Mr. Gaffney held Secretariat whenever he was shod and that is how he began acquiring the shoes of the great champion. Gaffney obtained the shoe on July 18, 1972, three days after Secretariat&rsquo;s maiden victory, when Secretariat was re-shod for his third career start. The plaque is signed by Mr. Gaffney, Ms. Chenery and Secretariat&rsquo;s long-time Hall of Fame jockey, Ron Turcotte, who would ride the horse following the maiden races. The piece comes with a Letter of Authenticity from Mr. Gaffney stating that the shoe is indeed genuine and obtained directly from Secretariat&rsquo;s farrier, George Collins. The winning bidder will receive the shoe&rsquo;s encoded serial numbers and their hidden location to further ensure continued authenticity. Letter of Authenticity is printed on heavy photographic paper and includes an actual photo of the plaque to further enhance the provenance of this extraordinary piece. Also, comes with 5x7" color note card picturing Jim Gaffney on Secretariat which opens to include color photos of both as well as 5x7" color photo of Jim and Secretariat signed by Jim Gaffney. The finest horseshoe ever offered from what many consider the greatest horse of all time.</p><p><strong>Addendum: The nails are not original as stated in the catalog description.</strong></p>