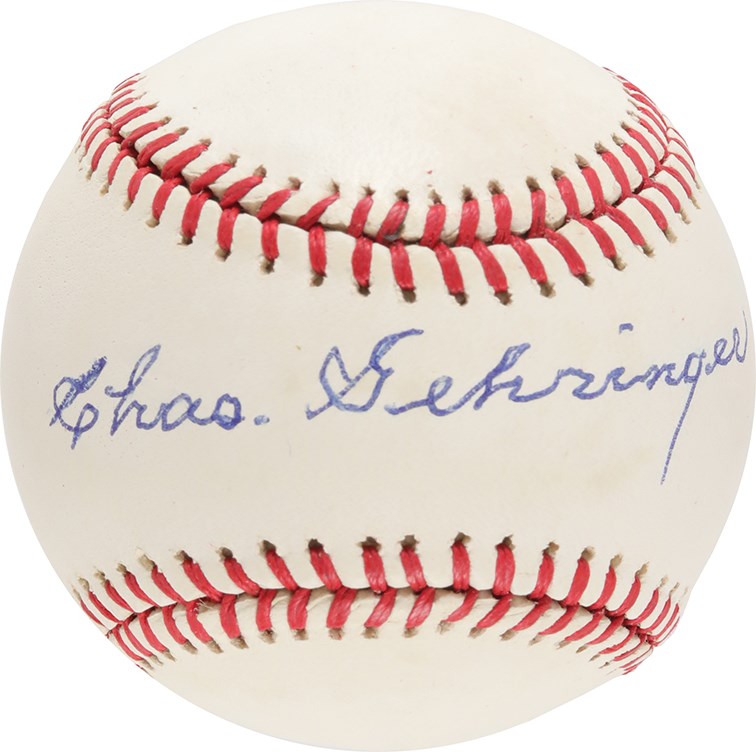 Offered is an Official American League Baseball (Bobby Brown) signed by Charlie Gehringer, a Hall of Fame second baseman. Gehringer, who played his entire 19-year career (1928-42) with the Detroit Tigers, was a very quiet man. His manager on the Tigers, Mickey Cochrane, once joked about Gehringer in saying," On Opening Day he says 'hello' and on closing day he says 'goodbye' and in between he hits .350." One of the greatest second basemen in history, Gehringer was called "The Mechanical Man" for the efficient, no fuss way he went about his business. Although Gehringer was very quiet, he did have a sense of humor. Once, at a banquet held in his honor, Gehringer rose to speak. He said, "I am known in baseball for being quiet. I will not ruin that reputation." Then he sat back down. Gehringer hit .320 lifetime, with 184 home runs. He won an American League batting crown when he hit .371 in 1937, the same year he was the AL MVP. He was a member of three pennant winning Detroit teams, and he was on the Tigers' 1935 World Series champs. Gehringer signed the baseball, in blue ink, in his usual way, as "Chas. Gehringer." Once, when asked why he usually signed autographs by abbreviating his first name, Charlie replied, "Why use seven letters when you can use four?" This autographed ball from an all-time great comes with a PSA Auto Grade 9 LOA.