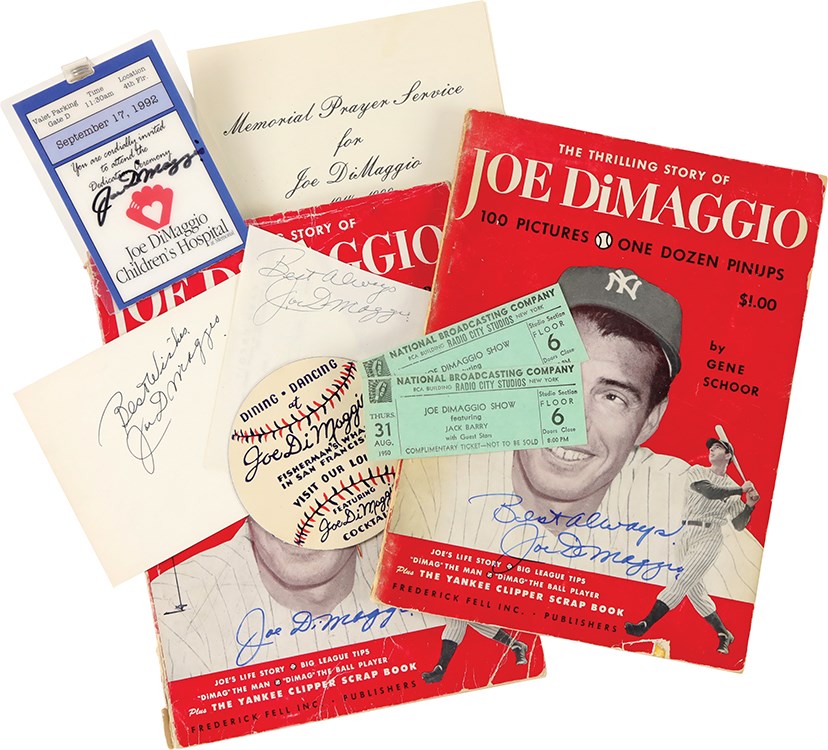 <p>Collection of seven items relating to Joe DiMaggio, three of which are signed by DiMaggio, plus two additional DiMaggio signed pieces. <strong>1-2) </strong>In 1950, Joe DiMaggio became the first major sports figure to star in his own television program. Tangible evidence of that fact is offered here with this pair of complimentary full tickets to the 1950 "Joe DiMaggio Show" television program, hosted by Jack Barry and aired by NBC at Radio City Studios in New York City. As noted in print on each, these tickets were issued for the August 31st show. Joe DiMaggio had a radio show on CBS in 1949. After it was cancelled, NBC picked it up and moved it to television, hoping to capitalize on the popularity of both DiMaggio and the new media that was becoming more commonplace in homes across the country. The "Joe DiMaggio Show" lasted only fifteen episodes, which has resulted in the rarity of all items relating to the program. These are the first such tickets we have ever seen. Each ticket (4x1.5") remains in Near Mint condition. <strong>3-4)</strong> Pair of first editions of "The Thrilling Story of Joe DiMaggio" by Gene Schoor (Frederick Fell Inc., New York, 1950). DiMaggio has signed each of the ninety-five-page softcover books in blue Sharpie (grading 10/10) on the front cover, adding "Best Always" above one of the signatures. Each book displays moderate-to-heavy wear, with one grading Very Good and the other Good. <strong>5)</strong> Paper coaster from Joe DiMaggio's Restaurant and Lounge in San Francisco. Includes a selected drink menu on the reverse. 3.5" in diamater. EX-MT. <strong>6)</strong> Laminated invitation badge issued for the September 17, 1992, dedication of the Joe DiMaggio Children's Hospital, signed by DiMaggio in black marker (9/10) on the front. The recipient's name has been cut off along the base, otherwise it is in Excellent condition, complete with its original lapel clip. <strong>7)</strong> Program from Joe DiMaggio's funeral service at St. Patrick's Cathedral in New York on April 23, 1999. The program (5.75x11", folded), remains in Excellent to Mint condition. <strong>8) </strong>Stella Flame (New York City clothing/gift store) advertising card (6x4") inscribed "Best Wishes Joe DiMaggio" in black ink (10/10) on the reverse. EX-MT. <strong>9)</strong> Joe DiMaggio Cut Signature. Signed "Best always Joe DiMaggio" in black ink on the reverse of an irregularly cut portion of a credit slip (3.75x4.5"). VG-EX.&nbsp;</p>