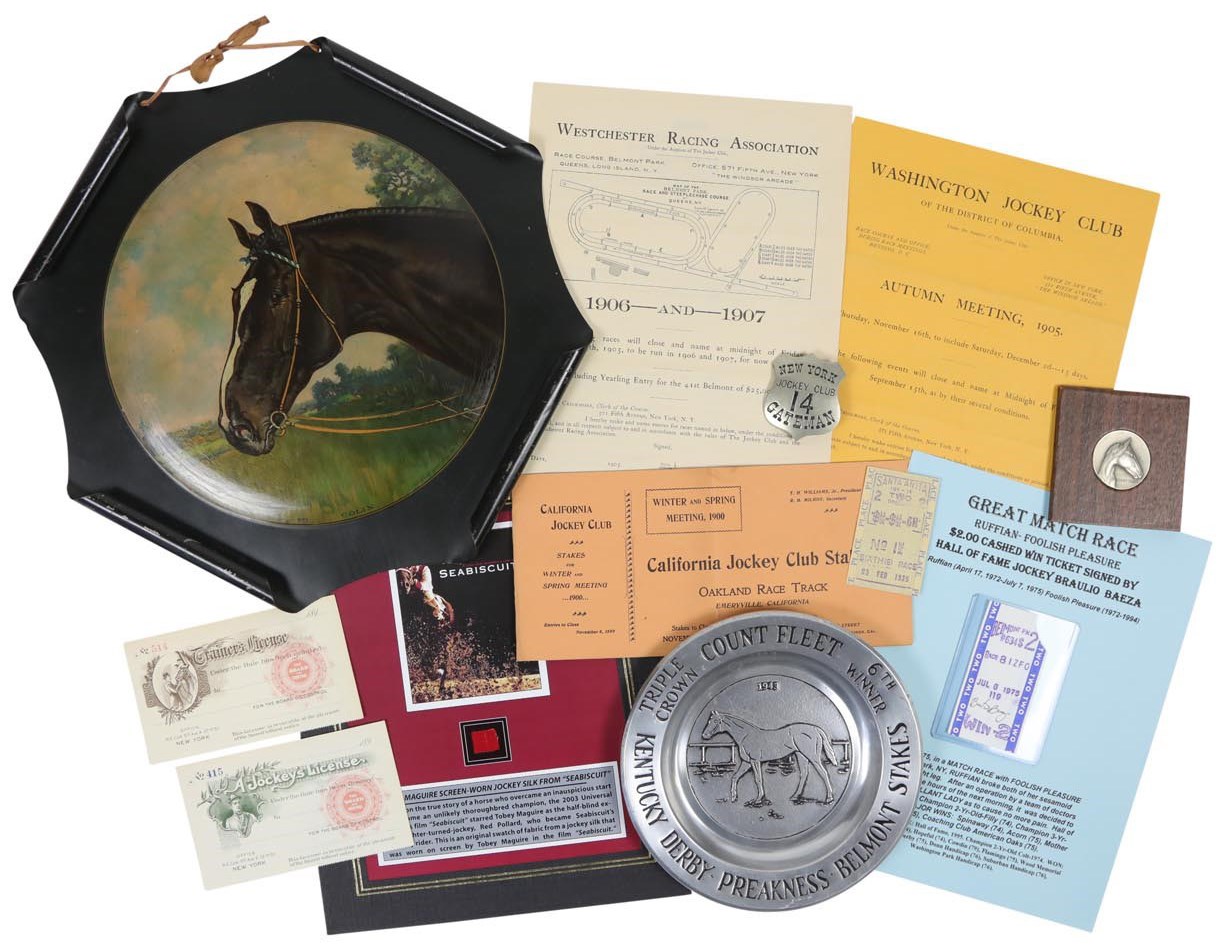 1) Colin metal tray (head shot in color) copyrighted 1908 and painted by Henry Stull the previous year. 2) Jockey &amp; trainer licenses issued by the Jockey Club&rsquo;s Board of Control in the 1890s. 3) Nominations to upcoming races: a) Westchester Racing Association application for the 1906 &amp; 1907 major races at Belmont Park, including the Belmont Stakes. b) California Jockey Club booklet containing entry forms to enter stakes races for both the 1900 winter &amp; spring meetings. c) Washington Jockey Club 1905 application to Benning Racecourse in D.C. for important upcoming races at the autumn meeting, including the Dixie, prior to the stakes race being moved to Pimlico after the former track&rsquo;s closing. 4) TRA &ldquo;Triple Crown&rdquo; Count Fleet silver medal made by MACO featuring .999 fine silver and marked by a serial number identifying the set. The back has stats from each TC victory and the item is hard to find. 5) 19th Century medal Gateman&rsquo;s Badge # 14, issued by the New York Jockey Club. It was used at the magnificent Morris Park Racetrack, at the time it was recognized as America&rsquo;s finest racecourse. The maker was well-known N. Stafford of NYC. 6) Portion of an original jockey silk jacket won by Tobey Maguire in the 2003 movie &ldquo;Seabiscuit.&rdquo; A signed C.O.A. from Premiere Props and Universal Pictures. 7) $2 cashed ticket on Foolish Pleasure in the ill-fated match with Ruffian. Signed by winning jockey, Braulio Baeza. All items are in wonderful condition, NRMT-MT. 8) $2 Santa Anita place ticket on Hall of Fame horse, Equipoise, in the 6th race on February 23, 1935. This race, the Santa Anita Handicap, was the first $100,000 race in the history of horse racing in the United States. The back has some writing. 9) Limited edition pewter plate of 1943 TC winner, Count Fleet, produced by the Victory Racing Plate Company to honor past TC victors. Designed by William Armetale, the plate contains no lead used in traditional pewter. Picture of horse appears in center and plate measures 7 7/8" in diameter, weighing about a pound.