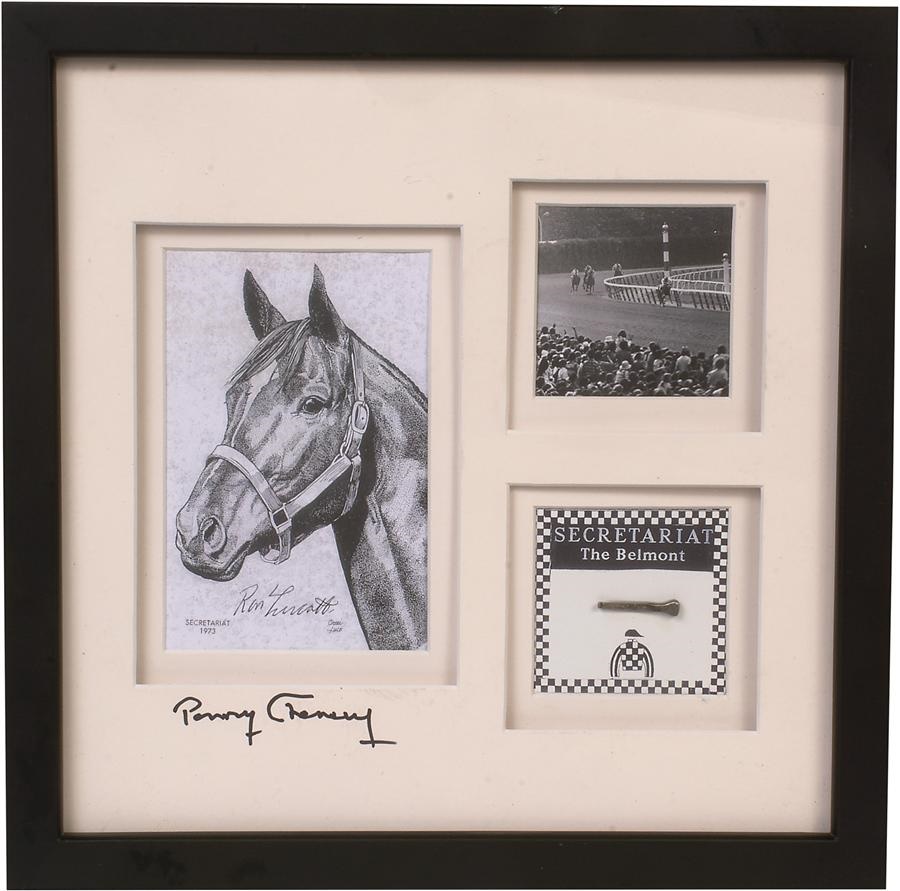 The Belmont nail, titled #SEC060973jgfr3131, in the Secratariat.com inventory, is part of a framed montage created by the late Jim Gaffney, the well-chronicled exercise rider intimately involved with the day-to-day activities of Secretariat in 1972-1973. Along with groom Eddie Sweat, he held Secretariat whenever he was shod and began acquiring the shoes and nails of the great champion from his maiden race forward. The featured nail was originally obtained on June 26, 1973, when Secretariat was re-shod by Meadow Stable farrier George Collins, seventeen days after winning the Belmont Stakes by 31 lengths, setting a new and still existing world record for 1 1/2 miles on dirt to complete his Triple Crown sweep. The performance was perhaps the most defining race in Secretariat’s career, and considered one of the top ten sporting achievements of the 20th century (Sports Illustrated, 2004). One of only a handful to exist - each individually cataloged and officially documented - it was initially sealed inside a brown envelope within the original shoe box. The nail has been kept in protected storage in the continued possession of either Mr. Gaffney or the Secretariat Archives since its acquisition more than 42 years ago. The impeccable provenance and historical significance cannot be overstated as the corresponding set of Belmont shoes in which the nails were removed reside in the collection of the National Museum of Racing in Saratoga Springs, New York. Framed to 12" x 12" it is hand-signed by Secretariat's owner, Penny Chenery, and with graphite illustration of Hall of Fame Jockey Ron Turcotte, and a small image of Secretariat rounding the stretch turn in his Belmont Stakes victory. The framed nail montage, one of only a few ever made, was personally assembled by Mr. Gaffney November 17, 2004, with his own handwritten comments regarding the nail and its authenticity prominently featured on the reverse of the matting. [Additional Secretariat Archive images are shown here including original 1973 handwritten notes from Mr. Gaffney documenting the shodding and acquisition date. Copies can be made upon request.]