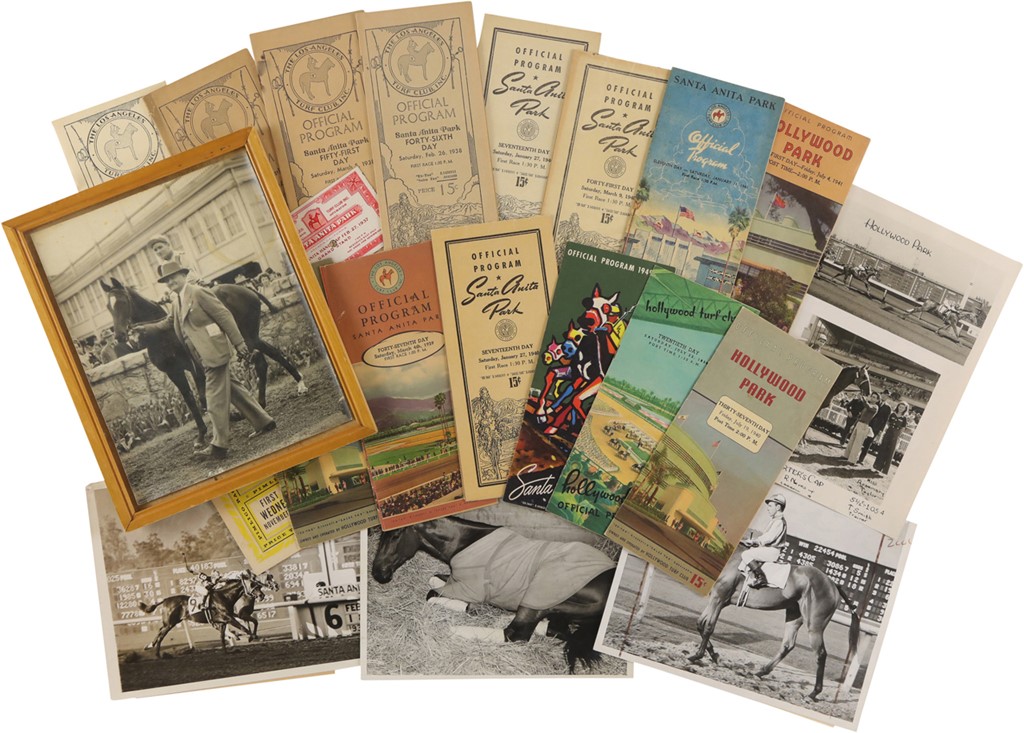 <p>This collection of original race programs and press photos represents the brightest stars and champions in the illustrious C. S. Howard Racing Stable. From the late 1930s to early 1950s, the red and white colors of the Howard Horses captured some of the biggest races of the day. This collection of vintage programs includes:</p><p>Seabiscuit Programs (4): Seabiscuit was the most famous horse in the Howard Stable and 1937 Champion Handicap Male and 1938 Horse of the Year, and his original programs are difficult to find and extremely coveted by any measure. This unusual grouping contains programs from the champion&rsquo;s first two starts as a 5-year-old in the Feb. 26, 1938 San Antonio Stakes and the prestigious March 5, 1938 Santa Anita Handicap. Each of these races were heart-stopping photo finish nose decisions in which Seabiscuit finished second to the talented winners Aneroid and Stagehand, respectively. The other two offerings are rarely seen Seabiscuit "scratch" programs (where Seabiscuit was entered and then withdrawn from the race after the publication of the program) for the Dec. 25, 1936 Christmas Day Handicap and the Jan. 16, 1937 San Felipe Handicap. As a final bonus, this lot includes an original grandstand admission ticket stub in near mint condition for Seabiscuit&rsquo;s Feb. 27, 1937 Santa Anita Handicap.</p><p>Original Kayak II Programs (4): Foaled in 1935, Kayak II was the overshadowed champion in the Howard barn during the Seabiscuit years. Kayak II was bred in Argentina and originally purchased by Lindsay Howard for his father Charles Howard. Trained by Tom Smith, Kayak II was named the Champion Older Male of 1939 and won 14 races, finishing in the money in 23 of his 26 U.S. starts. This amazing collection features programs from his two most important victories: the first in the rich March 4, 1939 Santa Anita Handicap and the second is the July 22, 1939 Hollywood Gold Cup. The other items in the collection are the Jan. 27, 1940 San Felipe scratch program and an incredibly rare Nov. 1, 1939 Pimlico Special program, the race in which he lost to the great champion and 1939 Horse of the Year Challedon by 1/2 length. Finally, a vintage era post parade photo of Kayak II and an original press photo from his nose victory in the Feb. 18, 1939 San Carlos Handicap completes this segment of the offering.</p><p>Mioland Programs (4): Foaled in 1937, Mioland was another talented and durable runner in the Howard stable. Mioland was a winner of 18 races in 50 starts with earnings of nearly a quarter million dollars, and was named the 1941 Older Male Champion. The original programs include his winning efforts in the Jan. 27, 1940 Spanish Trail Stakes (over the soon-to-be Kentucky Derby winner Gallahadion); March 9, 1940 San Juan Capistrano Handicap; Jan. 11, 1941 San Pasqual Handicap; and July 4, 1941 American Handicap. Two original press photos featuring Mioland on the track and in his stall complete this segment of the offering.</p><p>Noor Programs (2): Foaled in 1945, Noor was the Handicap Male Horse of 1950, winning 12 of 31 career starts with career earnings of $383,968. These original programs include his winning efforts in the 1950 American Handicap and the famous March 5, 1950 San Juan Capistrano Handicap, in which he beat the legendary Triple Crown champion Citation by a nose. In fact, Irish-bred Noor is the only horse in history to beat two U.S. Triple Crown winners, as he also twice defeated 1946 champion Assault.</p><p>Porter&rsquo;s Cape Program and Winners Circle Photo: Foaled in 1938 Porter&rsquo;s Cap was another multiple stakes winner for the Howard Stable who competed over the course of several years. Porter&rsquo;s Cap won 19 races of his 102 lifetime starts with total career earnings of a whopping $141,800. His signature victories include the 1940 Washington Park Futurity and the 1941 Santa Anita Derby. This rare coupling of an original program and vintage winner's circle photo documents a July 7, 1940 5 &frac12; furlong race early in his juvenile season. His Hall of Fame connections pictured in the winner&rsquo;s circle photo are famed trainer Tom Smith and jockey Ralph Neves.</p>