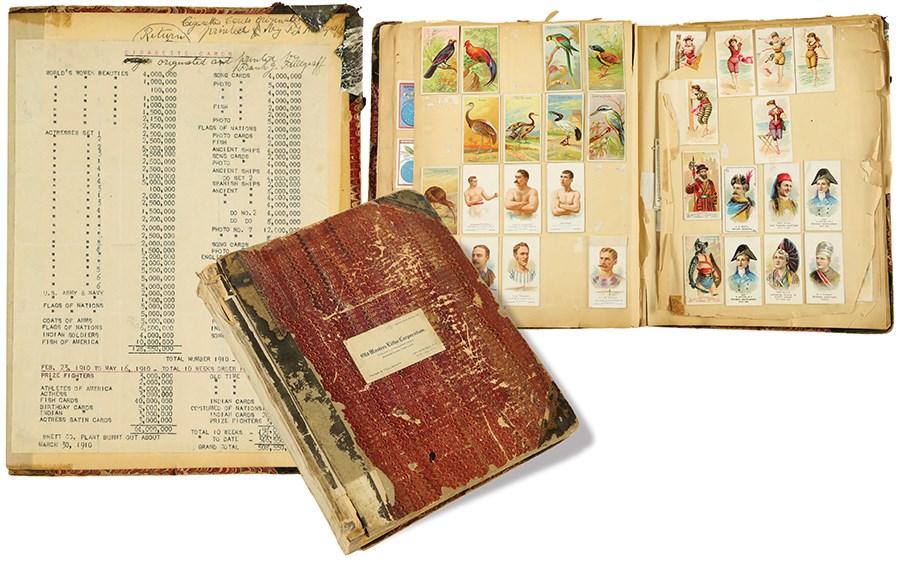 From the late 19th century comes this incredible piece of card collecting history. The Old Masters Litho.Corporation was located in New York City and run by a man named Frank Fullgraff. On the front of this book is his business card. The book itself is done in a scrapbook type format and is 12.5 by 10 inches. Thirty six pages in the book have cards or information pertaining to various issues of cards. Frank Fullgraff‚s company, The Old Masters, was responsible for printing many of the late 19th and early 20th century trading cards that were distributed with various products but mainly in packages of tobacco. The single cards in the book are pasted in and the fronts appear to be in mostly EX condition. As with any 120+ year old scrapbook, the pages are brittle and there is some chipping. To the best of our knowledge, there have been no cards removed form the book although there are some loose cards included. Well over 300 cards are contained within. This book was not done with collecting in mind, it was done as a business tool to keep track of what cards were printed and how they looked. Some of the proof cards and sheets are one-of-a-kind. Perhaps the most valuable in the book are the T220 Boxing Champions issued with Mecca Cigarettes in 1910-there are 49 of these. There is also a proof sheet of the 1910 T225 boxing series which has 18 cards. The only other sports cards are 6 of the 1888 N28 Allen & Ginter cards with the best being John L. Sullivan. Many non-sports issues are in the book including Actresses, Flags of Nations, Flags of Nations Pin proofs, Birds, Silks, Beautiful Bathers, Ships, and many others. As mentioned, many of these are proofs, some being on sheets. An interesting note in the book where Frank Fullgraff credits himself with naming the Turkey Red Cigarettes along with several proofs for the Turkey Reds packaging. But, we save the best for last and it is located on the very last page of the book. A typed sheet listing the issues and the quantities of cards that were printed. This information is staggering! Things like "Fish Cards 40,000,000". That‚s correct, FORTY MILLION cards were printed of just fish!. Others such as Indian Cards 20,000,000 and 30,000,000, Flags of Nations 6,500,000, Prize Fighters 3,000,000 and 2,000,000 and so on. It makes one wonder, where did all of these cards go? This book represents a very important discovery in the world of card collecting.