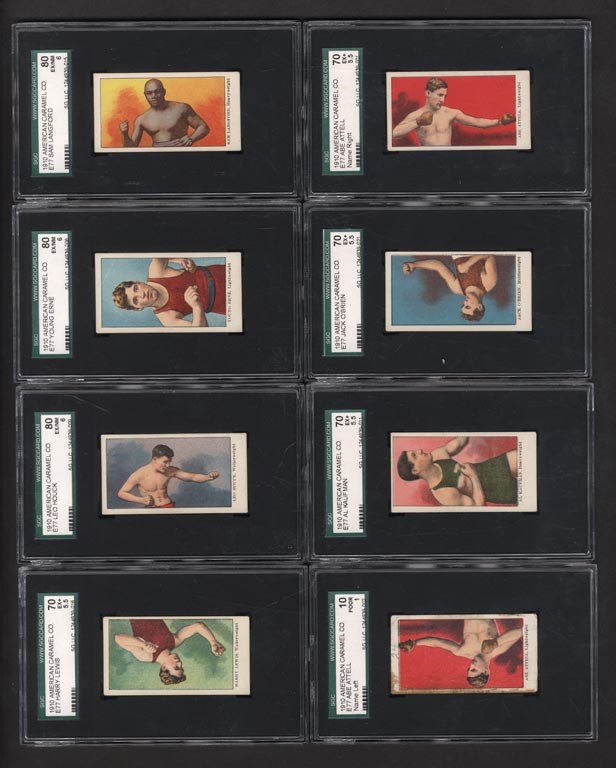 If E75-E76-E79 are the mainstream caramel sets of the prewar era, then E77 represents a substantial step up in rarity from those sets. Issued by the American Caramel Company, this set has 24 cards including two wrestlers (Gotch and Hackenschmidt). There is one significant variation, though it is not fully catalogued: at least some of the horizontal cards can be found with the name at the left or at the right of the image. The cards with name at right are the scarcer of the two varieties. This set includes the base cards and two of the left side variations: Abe Attell and Owen Moran. If you can run down the Benny Kaufman and Leo Houck variations you would have a master set of known cards. The condition breakdown of the set is interesting. As you can see, most cards are solid mid-grade examples and are currently #1 on the SGC registry. The breakdown is as follows:SGC 80 Erne, Houck, LangfordSGC 70 Al Kaufman, Attell, Lewis, O'BrienSGC 60 Benny Kaufman, Burns, Flynn, Hackenschmidt, Johnson, Kaufman and Johnson, Nelson and Wolgast, WolgastSGC 50 Coulon, Ferguson, McFarland, Moran (L), Moran (R), Wolgast and NelsonSGC 40 Driscoll, Gotch, KetchellSGC 40 PapkeSGE 10 Atell