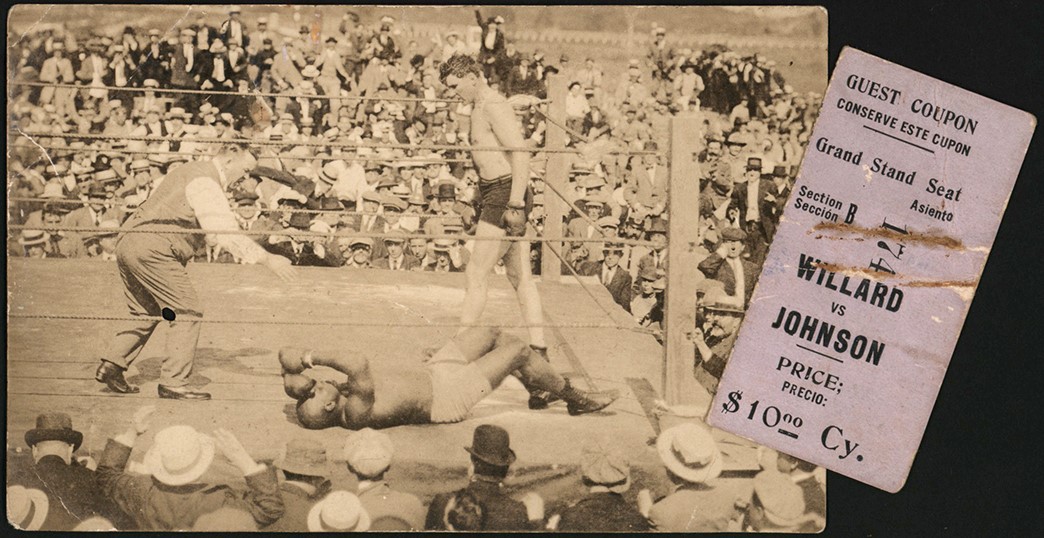 Rare ticket stub issued for the heavyweight title bout between champion Jack Johnson and Jess Willard held at the Oriental Park Racetrack in Havana, Cuba on April 5, 1915. Accompanied by a real-photo postcard published after the bout. The ticket stub, which is lettered in both Spanish and English, was issued for a $10 "Grand Stand Seat." This is just the second ticket stub from this bout we have ever offered. It's rarity is due in large part from the bout having been held in a foreign country that was later closed to Americans following the Cuban Revolution in 1959. The ticket (1.25x1.5") displays a heavy diagonal crease, several lesser creases, and a stained paperclip impression. In Fair to Good condition overall. Willard, nicknamed the "Pottawattamie Giant" on account of his massive six foot, six inch height, was a decided underdog in the bout against Johnson. The fact that Willard was white and Johnson African American also earned Willard the age-old mantle of being the next "Great White Hope," a term often bestowed upon the many challengers to Johnson's title in the previous seven years. (Johnson refused to fight African American fighters for the title because bouts against white fighters brought him much more revenue.) Johnson was the more skilled boxer of the two, but Willard's size and counter-punching style eventually wore Johnson down and he was finally able to land a crushing blow in the 26th round that put Johnson down for the count. Johnson, who was 37 years old, never again fought for the title. Accompanying the ticket stub is a real-photo postcard picturing Willard standing over a fallen Johnson as the referee counts him out. The postcard (5.5x3.5"), which is neither addressed nor mailed, displays several creases, a tack hole in the area of the referee's legs, and paperclip impressions on the reverse. In Fair to Good condition overall.&nbsp;