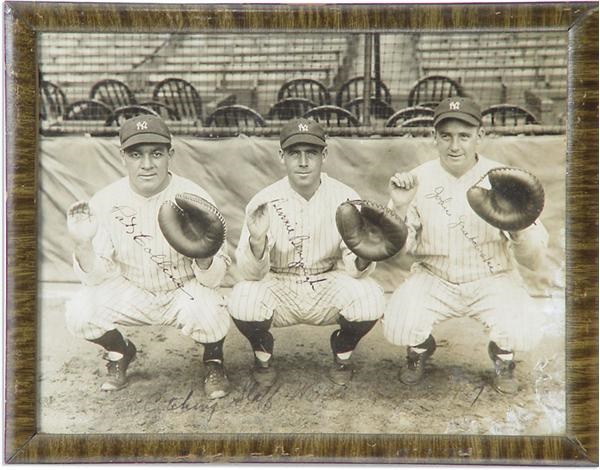 The 1927 New York Yankees were arguably the greatest team to ever take the field. As a result, the demand for vintage memorabilia related to this remarkable group almost always exceeds the supply. Autograph collectors looking to complete a set of 1927 New York Yankee signatures have an especially difficult task on their hands. While there is certainly no shortage of Babe Ruth and Lou Gehrig autographs on the market, there are several members of the team whose signatures are so rare that they are seldom offered for sale in any form. One such signature is that of back up catcher John Grabowski. Grabowski was a part of the New York Yankee championship teams of both 1927 and 1928, and passed away in 1946 as a result of burns received during a fire which destroyed his home. We are pleased to present what is perhaps the finest John Grabowski autograph in existence. The offered item is an original photograph of the three 1927 New York Yankee catchers, Pat Collins, Bennie Bengough, and John Grabowski, signed by each in beautiful black fountain pen ink. The amazing photo, which originates from the Bennie Bengough estate, is housed in the original vintage frame, and measures approximately 10" x 8" overall. There is some light bubbling near the lower right hand corner of the image, but this does little to detract from the overall tremendous display value of the piece. The Collins and Bengough signatures are quite bold and rate a 9 out of a possible 10 in strength. The exceedingly rare John Grabowski signature is just a shade lighter than those of his counterparts, and rates an 8 out of 10. There is also an inscription ("Catching Staff World's Champions 1927"), penned by Bengough, which runs horizontally along the bottom of the piece and rates a 5-6 out of 10. This is the first Grabowski signed photo that we have ever seen, and given the aesthetic appeal of the piece, as well as the fantastic provenance, it is likely that any subsequent discoveries will pale in comparison.