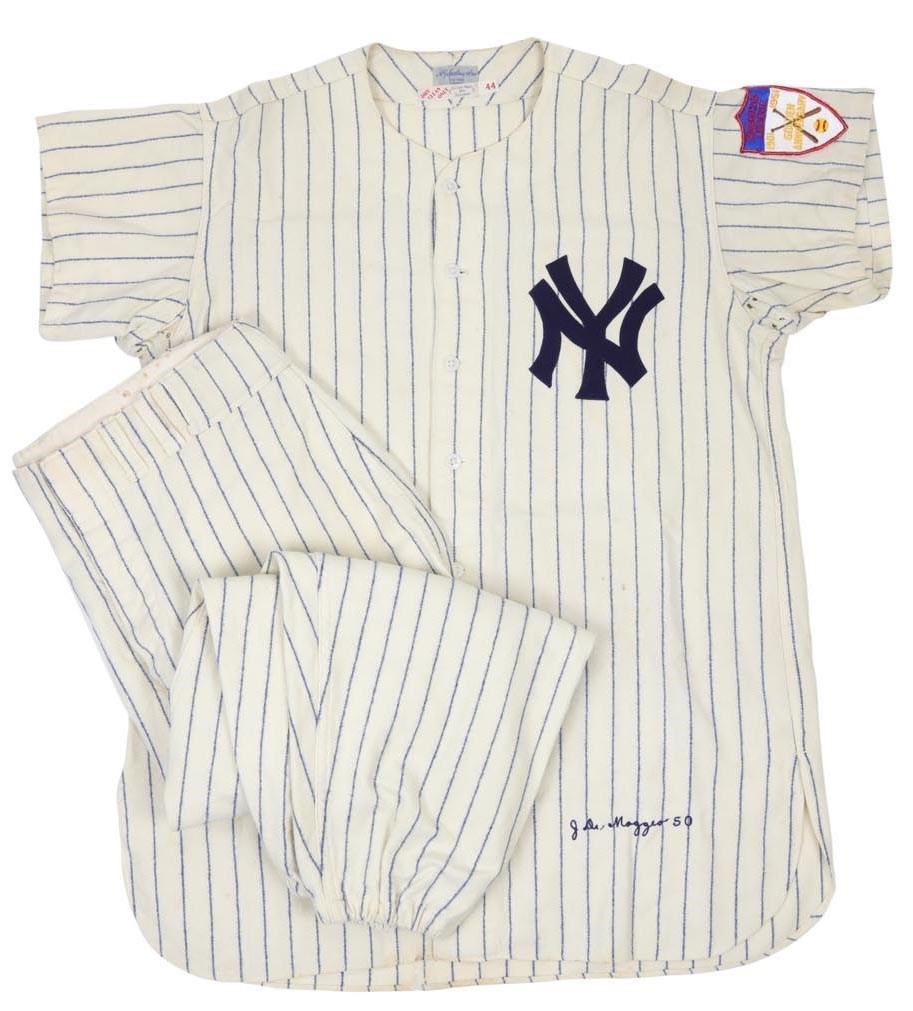 One of the most elusive Live Ball era flannels and the toughest of the &ldquo;big four&rdquo; (Ruth, Gehrig, DiMaggio, Mantle), Joe DiMaggio gamers in any condition are incredibly scarce and their population can probably be tabulated on one hand. The primary reason for this dearth is the fact that it was common practice for Major League teams to bequeath their uniforms, after the season had ended, for use by their minor league affiliates. Usually, that also meant that the names, number, logos, and patches were removed and replaced with those of the new owners.On offer here is a beautiful Joe DiMaggio gamer from the 1950 AND 1951 championship seasons as the Bronx Bombers won their second and third of five consecutive World Series crowns. The jersey has been photo-matched to an astounding SIX games, including TWO home run games! The exact dates are: April 21, 1950 (HR Game #1 - 1st HR of the Season), July 8, 1950, August 22, 1950, September 2, 1950 (HR Game #2), March 23, 1951 and an additional image from 1950. In these mentioned games, DiMaggio went 9-for-16 with 2 HRs, 9 RBI and a stolen base! The pants have also been photo-matched to the March 23, 1951 date. A marvel of modern minimalism, the seven-button-front home white flannel specimen with blue pinstripes heralds three additional monumental design elements, including the Yankees famed intertwined &ldquo;NY&rdquo; logo over the left chest and Joe&rsquo;s solitary &ldquo;5&rdquo; on the verso, both sewn on in midnight navy felt, plus the brilliant 1901-1951 American League Golden Anniversary patch on the left sleeve, which was added at the conclusion of the season as the jersey was carried over for use during DiMaggio&rsquo;s final season. Tagging includes &ldquo;A.G. Spalding &amp; Bros, New York, Chicago,&rdquo; &ldquo;Dry Clean Only,&rdquo; and &ldquo;44&rdquo; in the collar and &ldquo;J DiMaggio 50&rdquo; stitched in midnight navy blue chain-link in the tail.Matching pants include &ldquo;A.G. Spalding &amp; Bros, New York, Chicago,&rdquo; &ldquo;Dry Clean Only,&rdquo; and &ldquo;44&rdquo; tags in the waist, just below a felt swatch with &ldquo;J DiMaggio 50&rdquo; in midnight navy chain-link.In addition to its cultural significance and monetary value as a collectible, this specimen is also aesthetically spectacular in terms of its individual design components, as well as the sum of its parts. The uniform has been awarded a MEARS grade of A8, with flannel expert Dave Grob subtracting two points for soiling, patch replacement, and the tear in real tail and also comes with two full detailed LOAs from Resolution Photomatching. This is an extremely rare, museum-quality exemplar, the likes of which may not be available again for a long time.