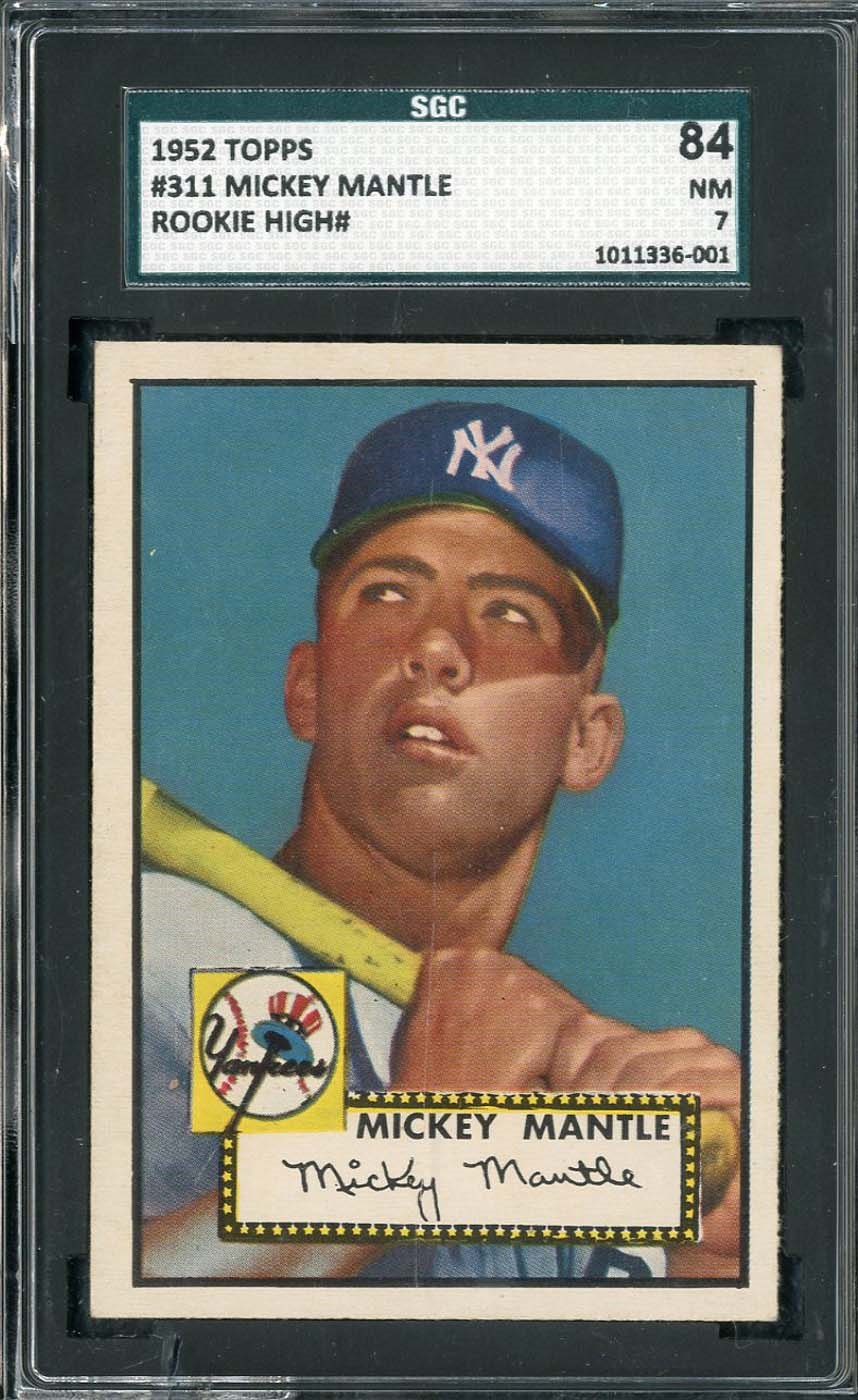 Graded by SGC NM 7. Arguably the hottest card in the hobby right now is the 1952 Topps #311 Mickey Mantle card. High grade examples have commanded increasingly higher prices at auction, and there appears no change in sight. With ever-increasing amounts of new collectors entering the sports card market from other collecting avenues, the prices likely will continue to rise for premiere cardboard treasures, specifically "The Mantle Rookie." While the 1951 Bowman is his first issued card, there is no doubt who the King of Mantle cards is and which card is known throughout the hobby as his Rookie. Topps head honcho Sy Berger and his right hand man Woody Gelman, thought they knew what they were doing in 1952 to keep the young boys buying baseball cards into September and football season. Their tactic was to issue most of the stars, especially from the three New York teams, in the later or "high number" series, and they began this series with the young phenom at card #311 with Mickey Mantle. Well, the kids didn't bite at this tactic and players such as Jackie Robinson, Roy Campanella, Bobby Thomson and Eddie Mathews, but especially Mantle, were dumped at the end of the year and are in exceedingly short supply. The 1952 Topps Mickey Mantle rookie card is so popular it is even well known to people outside the hobby. Anyone who has seen the boyish Yankee surrounded by the bright blue sky background are instantly drawn to the charismatic effects of this card. When at a small show and there is a crowd surrounding a table, eyes draw to a locked showcase, it is almost assuredly a 1952 Mantle drawing in the people. Leland's is proud to offer this 1952 Topps #311 Mickey Mantle card in Near Mint condition, with aesthetic advances which give the card an eye appealing stature higher than the assigned grade. This card is nearly dead centered with zero tilt, so uncommon with this issue. The colors jump off the cardboard with a bright blue sky and deep yellow color of the baseball bat. The reverse is pristine with a perfect print strike with a deep red box and uninterrupted printing. Very light rough cuts appear on each edge; a true assurance of the offered card's originality, and adds an attractive second frame to the bold image. If we had to guess, we think this card might have originated from the 1952 Topps Find of high end cards. One of the nicest Near Mint 1952 Topps #311 Mickey Mantle Rookie cards extant and professionally graded by SGC 84 NM 7.