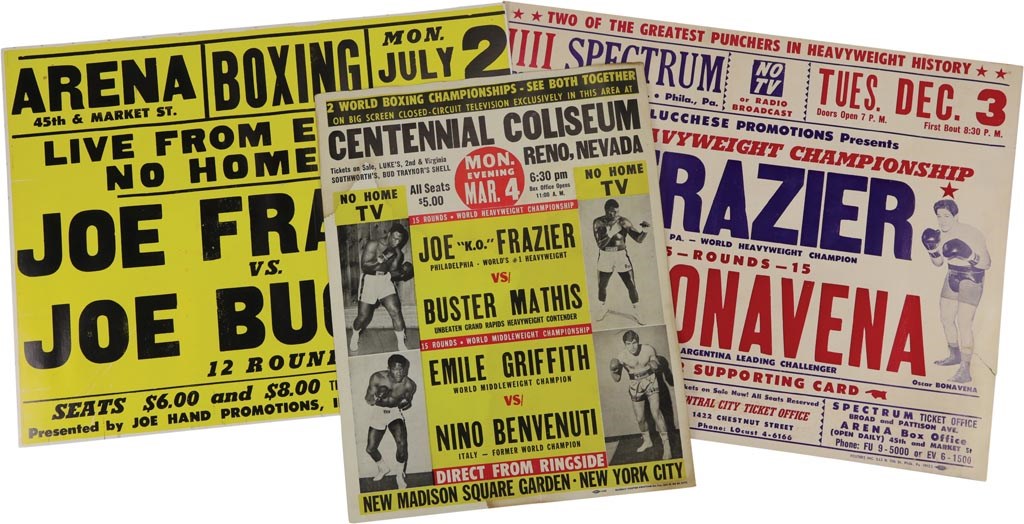 Three beauties from Smokin' Joe at the height of his powers: 1) Frazier fought Buster Mathis for a share of the Heavyweight title that was stripped from Muhammad Ali. On March 4, 1968, at Madison Square Garden, the first boxing card at the third MSG. Frazier and Mathis were both undefeated and Frazier won by a TKO in the 11th. round. Measures 17.75x22.75". Poster exhibits some wear with staining (top left and at bottom), minor paper loss, and wrinkling. 2) Frazier versus Oscar Bonavena at The Spectrum in Philadelphia on December 10, 1968, originally scheduled for Dec. 3, 1968, as printed on poster. Frazier retained his share of the Heavyweight Championship by decision over Bonavena. Poster has some signs of wear, including minor stains, minor paper loss, and some light wrinkling. Measures 22x27.75". 3) Frazier versus Joe Bugner. The fight was held on July 2, 1973, at Earls Court Arena, Kensington, London, England. The poster is advertising closed circuit viewing from the Philadelphia Arena. Frazier won by a decision in the 12th. round. The fight is regarded as a classic as Frazier knocked down Bugner in the 10th round, and yet Bugner fought back to almost earn the decision. Measures 21.25x27.25" with minor staining, minor paper loss, light wrinkling in two corners, and a few minor marks from where it may have been stapled.