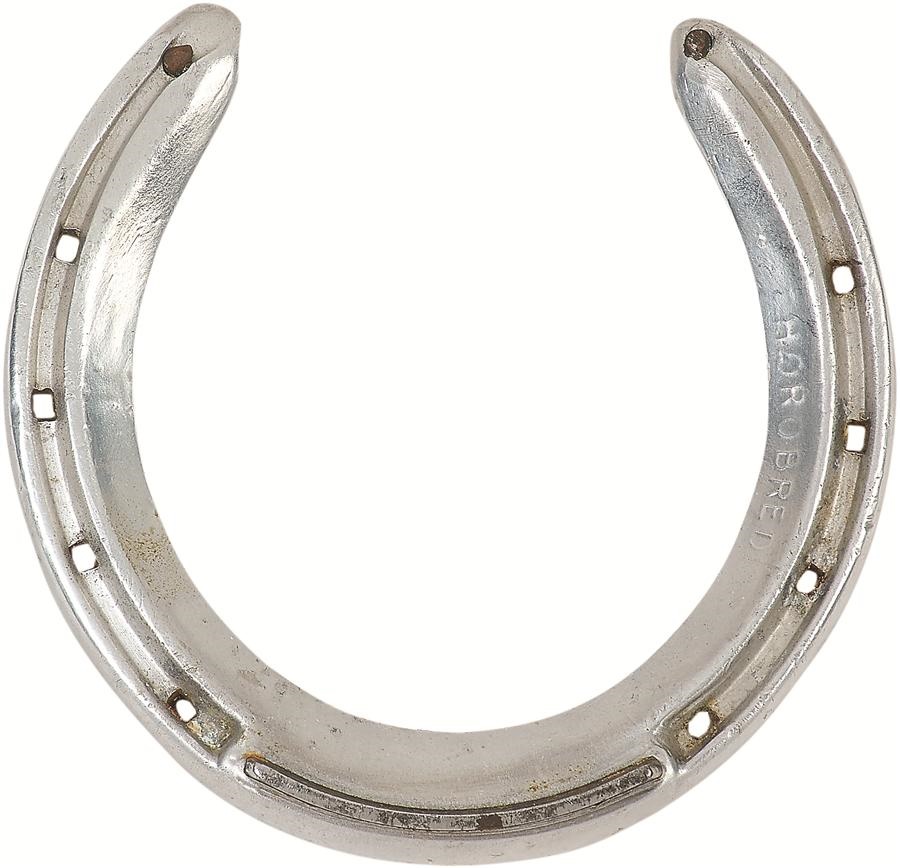 Secretariat worn horse shoes are among the most coveted and valuable artifacts in racing memorabilia. This very special shoe with impeccable provenance and an equally amazing back story offers the remarkable opportunity to own a shoe directly linked to not one, but two principal figures associated with Secretariat. This Hialeah shoe was originally acquired by the late Jim Gaffney, who served as the exercise rider for the Meadow Stable and was an integral part of Secretariat’s the day-to-day activities in 1972-1973. His experience with Secretariat is chronicled in both William Nack’s book, “Secretariat, The Making of A Champion,” and Raymond Woolfe’s book, “SECRETARIAT.” Along with groom Eddie Sweat, they were responsible for holding Secretariat whenever he was shod and began acquiring the shoes and nails of the great champion from his maiden race forward. Mr. Gaffney obtained the shoe in the interim training period between Secretariat’s 2-year-old and 3-year-old racing campaigns. In late November, following Secretariat’s successful juvenile season in 1972, trainer Lucien Laurin shipped Secretariat to the Sunshine State to begin training at Hialeah Park over the winter break in preparation for the colt’s highly anticipated first start in 1973. Originally pointed to run in the Flamingo Stakes, Secretariat instead returned to New York in early March to make his first start in the March 17 Bay Shore Stakes at Aqueduct Racecourse. For the next 17 years the shoe remained in Mr. Gaffney's treasured possession. Though not worn in a specific race this is in fact a racing shoe worn by Secretariat. What makes this shoe doubly special is the path it subsequently traveled. It is one of two shoes Mr. Gaffney gifted to Mr. Nack upon the June 4, 1990, release of the memorable Sports Illustrated article “Pure Heart,” the acclaimed author's intimate and poignant account of Secretariat’s death. In the article, Mr. Nack again credits Mr. Gaffney for first introducing him to the Meadow Stable colt before Secretariat began to race. Mr. Gaffney, so moved by the article and the mention, immediately bestowed the shoes in appreciation. The shoe is one of only a handful of authenticated Secretariat-worn racing plates in existence and is officially catalogued in the Secretariat Archive Registry. Manufactured by the Thoro’bred Inc., which supplied many of Secretariat’s racing plates throughout his career. Kept in protected storage while in the continued possession of Mr. Gaffney or Mr. Nack since its acquisition. Accompanying the shoe is an original letter from Mr. Nack documenting the provenance and circumstances regarding its history in further detail and one of the few known color photos of Secretariat while he trained at Hialeah, hand-signed by Mr. Gaffney and Secretariat's Hall of Fame jockey Ron Turcotte. IMPORTANT: Comes with Letter of Authenticity on the stationery of the Secretariat Meadow Stable from Mr. Leonard Lusky, President of Secretariat.com