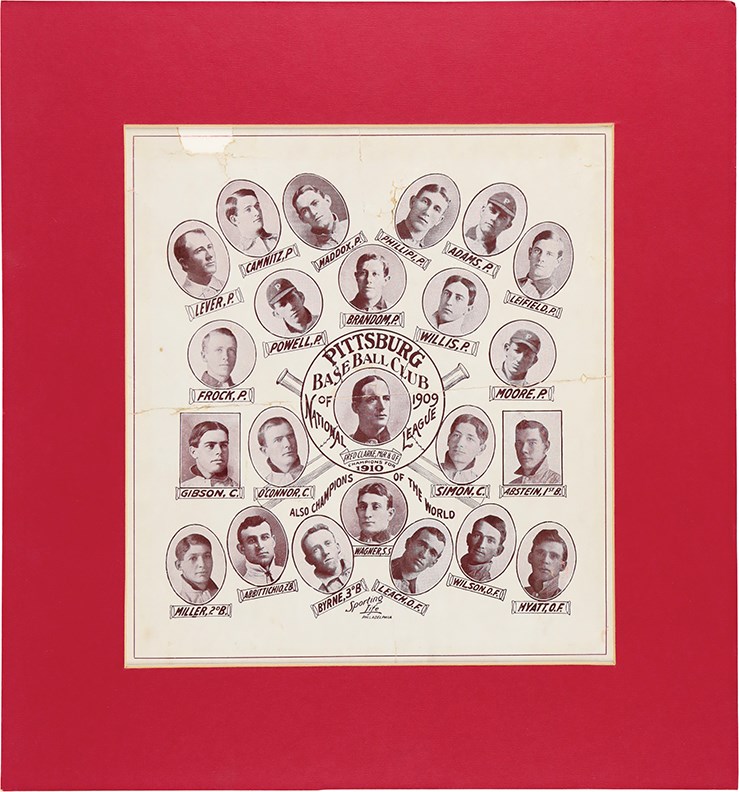 1909 Pittsburgh Pirates W601 Sporting Life team composite dating from the club's World Championship season. The attractive display features portrait images of twenty-three team members, including Honus Wagner, manager Fred Clarke, Vic Willis, Babe Adams, Howie Camnitz, Tommy Leach, George Gibson, Owen Wilson, and Deacon Phillippe (spelled "Phillipi"). It should be noted that the photo of Honus Wagner featured on this piece is the famous Carl Horner portrait that was used on Wagner's now iconic T206 tobacco card, only here, the image has been reversed. The printing notes that the Pirates are "Champions of the World" and "Champions for 1910." (It was the practice at the time to refer to teams as champions for the following season until they were officially dethroned.) Because of their fragile nature, these Sporting Life team composites are scarce today. This is the first 1909 Pirates example we have ever handled and we cannot recall the last time we have seen another. The W601 Sporting Life premiums could be purchased individually, or as a complete set, which was issued in a bound volume. Those issued in the bound volume all have pre-punched holes along the left border. The offered piece has been dry mounted onto a cardboard backing and matted, so we cannot tell if it came from an album. The team composite (10.25x11.25", visible dimensions) displays a horizontal and vertical fold, an area of paper loss in the upper left corner, and several smaller interior tears and creases. Technically in Fair to Good condition overall, but the mounting process has ameliorated many of the flaws and it presents well. Matted to total dimensions of 15.5x16.5".