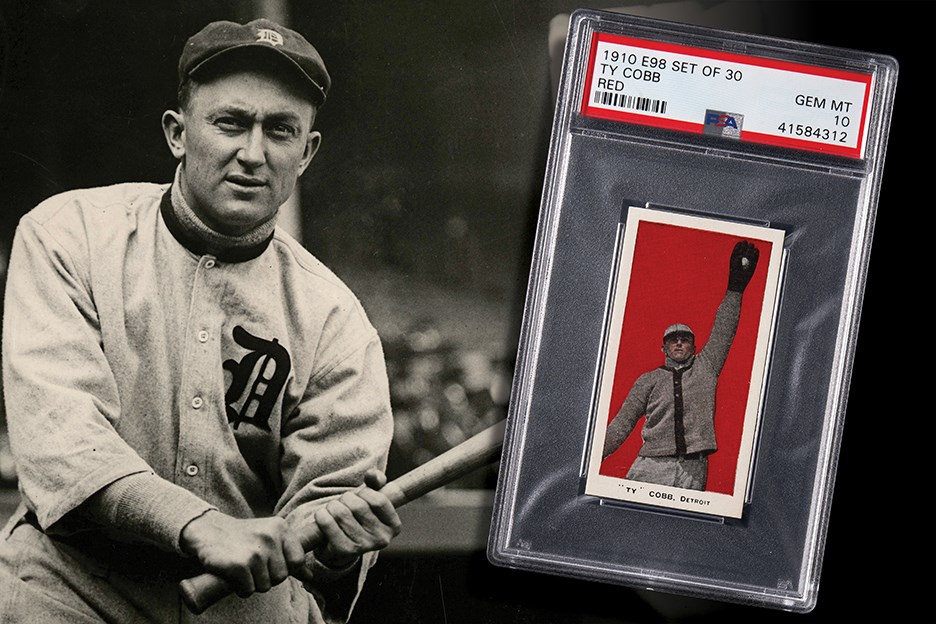 <p>A gem among gems, this 1910 E98 Ty Cobb (Red) card not only appears as though it just emerged from a pack, but one could say it remains as fresh as the day it was printed. Even a hallowed PSA GEM MT 10 grade does not do this justice as it must be seen to be appreciated, particularly considering its vintage. The set was created by an unknown manufacturer in the style of the emerging "Caramel Cards" of the day, allowing kids access to the successful tobacco-style cards of the previous generation. A total of 30 players were represented in the unnumbered set, with variations of each by color background, including Red, Blue, Green, and Orange, with the back containing a full list of players. Interest in these cards skyrocketed after the famous 2012 &ldquo;Black Swamp Find&rdquo; in which 700 caramel cards were discovered in an attic in Ohio, but the PSA POP report provides a road map to just how exceptional this offering is. Not only is this specific card a POP 1-of-2 (and it might have attained an even higher grade if one were available), but only 1,700+ specimens from this set have ever been submitted for grading; of that group, only TEN have achieved perfection, across all players and variations. Considered one of the most scarce and well-conditioned cards dating from pre-World War I in circulation, the most recent sale of a card of this grade exceeded $260,000 in 2019, and as the hobby only continues to soar in popularity and demand, this could prove be one of the most legendary cards to ever come to market.</p><p>Estimate: $400,000-500,000*</p>