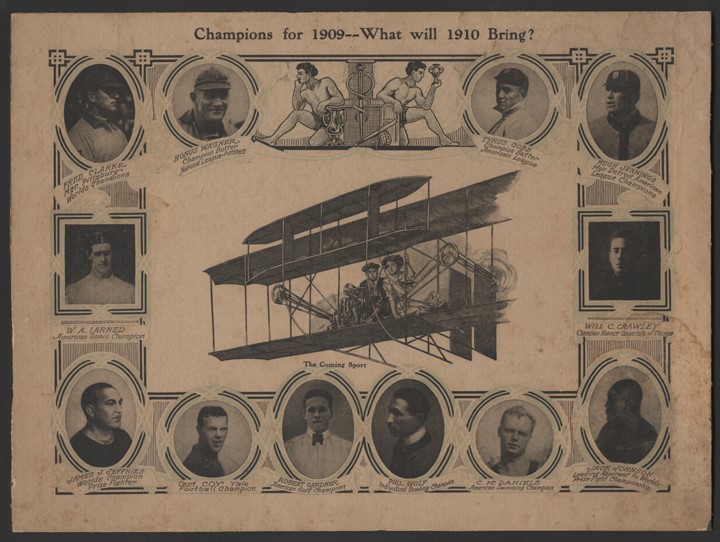 <p>Unusual artifact, one we haven't seen before, featuring the "Champions for 1909." Measuring 12x9", the centerpiece is a Wright Brothers type airplane (captioned, "The Coming Sport"), which is surrounded by these able champions: Cobb, Wagner, Gardner, Clarke, Jennings, Larned, Coy, Wolf, Daniels, Crawley, Jack Johnson (leading aspirant to World's Prize Fight Champion), and James Jeffries (Worlds Champion Prize Fighter). Interestingly, Johnson was actually the champion, having beaten Tommy Burns in Sydney while Jeffries was retired and all was settled in 1910 when Johnson beat Jeffries on points. Mounted on board with some foxing and light stains, light pencil writing on back, but presents marvelously as the classic piece it is.</p><p><strong><em>Addendum from noted boxing historian Tony Gee:&nbsp;</em></strong><span style="font-family: 'Times New Roman'; font-size: medium;"><em>Johnson did not beat Jeffries on points, but instead the referee brought the fight to an end in the 15th round (Washington Post 5 July 1910). N.B. The conclusion to the contest is succinctly discussed in The Definitive History of World Championship Boxing Super Middleweight to Heavyweight by Barry J. Hugman.)</em></span></p>