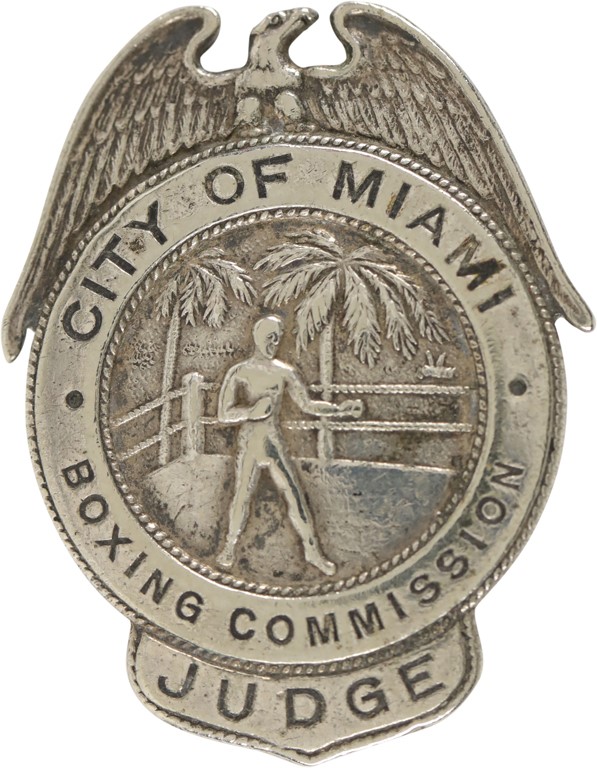 A great memento of the fight that Sports Illustrated named as, "The fourth greatest sports moment in the Twentieth Century." Recently discovered in Florida, this dates to the classic 1964 era of Cassius Clay versus Sonny Liston - the upset that shocked the world. Liston was the World Heavyweight Champion, having knocked out the reigning champion, Floyd Patterson in the first round to win the title and then knocked out Patterson, once again in the first round, in a rematch. When Cassius Clay (who had not yet changed his name to Muhammad Ali) faced Liston on February 25, 1964, in Miami Beach, Florida, for the Heavyweight Championship, Liston was a heavy favorite and a feared boxer. Clay (Ali) survived a problem with stinging in his eyes from some substance (some believed it was from Liston's gloves) and hung on to complete the sixth round. At this point, Liston failed to answer the bell for the seventh round and Clay was declared the Heavyweight Champion. Later, Liston claimed an injured shoulder, but the ending was highly controversial as it was the first time a heavyweight champion had failed to answer the ball in a championship fight. As Muhammad Ali, the new champion defended his crown in a rematch in Lewiston, Maine, by knocking out Liston in the first round. Professional badge in nickel is beautifully done. Badge reads, "City of Miami, Boxing Commission Judge." Depicts a boxer in a ring, palm tress in the background. Measures approximately 1.25x1.75".