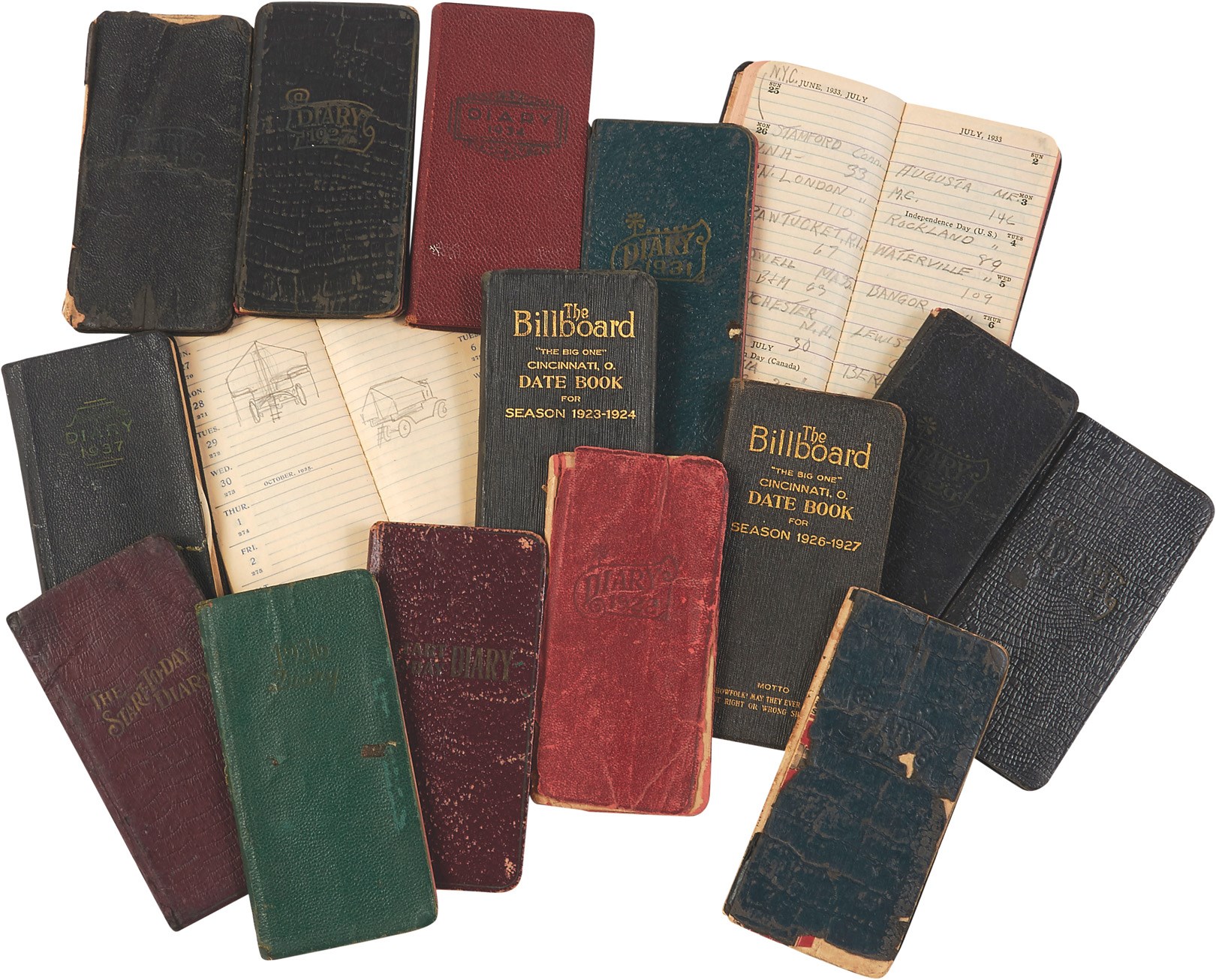 Emmett Kelly's burgeoning career is dutifully chronicled in this set of 18 performance diaries used by Kelly from 1921-1937. There is at least one from every year during that span and each contains a treasure trove of tidbits from the acclaimed performer's rise to prominence. Highlighted by Emmett's 1928 diary that features a hand drawn sketch of himself as a different clown, not the one that he was most known for. A photo is included to show Emmett as this different clown. By 1923, Kelly was working as a trapeze artist with John Robinson's circus, and it was during this time he met his wife. Kelly first appeared as Weary Willie in 1933, and the corresponding diary definitely has the date of this historic event. The amazing content scrawled in these diaries includes circuses, fairs, and more from a remarkable performing career. Kelly's work ethic stands out while combing through them, as his schedule was typically jam-packed year round; it was not uncommon for him to perform six days a week for months on end. Kelly wrote the names of each city he performed in - a list that blankets the country. All have Emmett's personal information handwritten on the front page, including his address, shirt size, emergency contact and even his car model. Kelly kept copious records of this time, including miles traveled, money saved to date, and expenses, and some diaries have jokes written in the back along with return addresses for multiple family members. The majority are handwritten in pencil, though some are in fountain pen. Two of the earlier diaries have detached covers and some have loose bindings. They show a good amount of wear, which is obvious considering they were toted all around the country, and come directly from the family of Emmett Kelly. These are extraordinary keepsakes from an iconic performer. 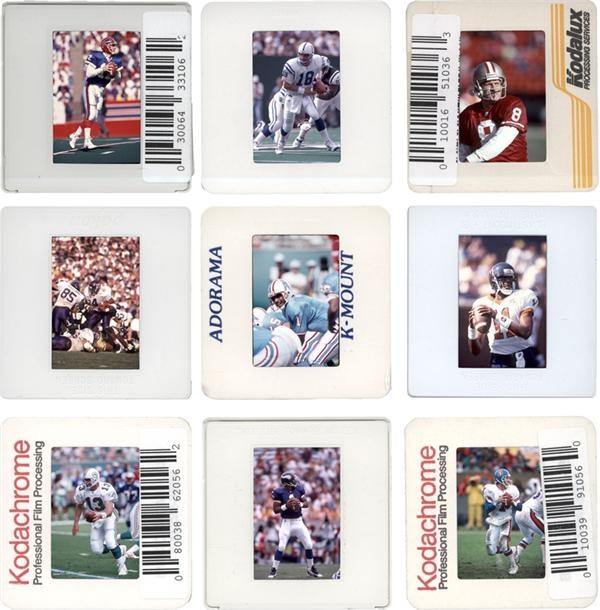 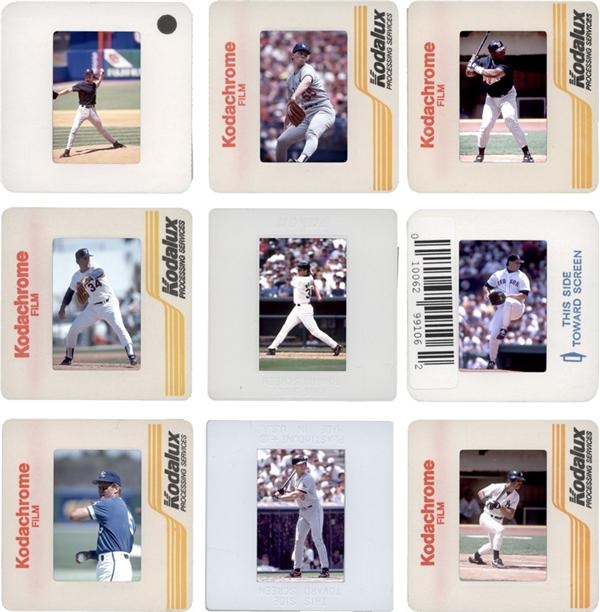 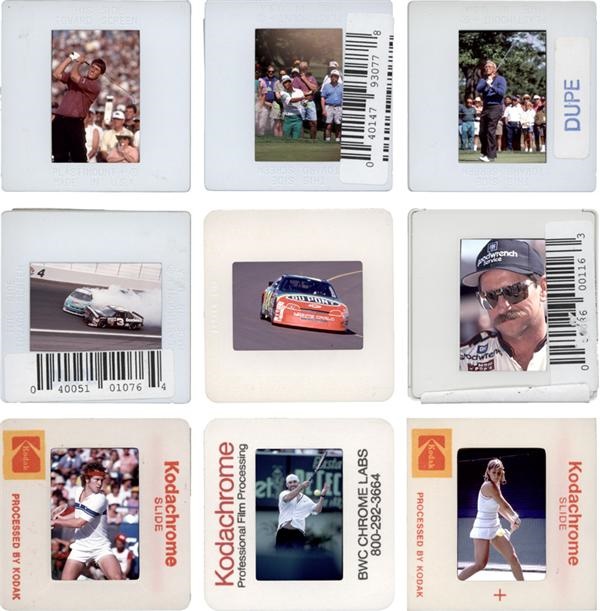 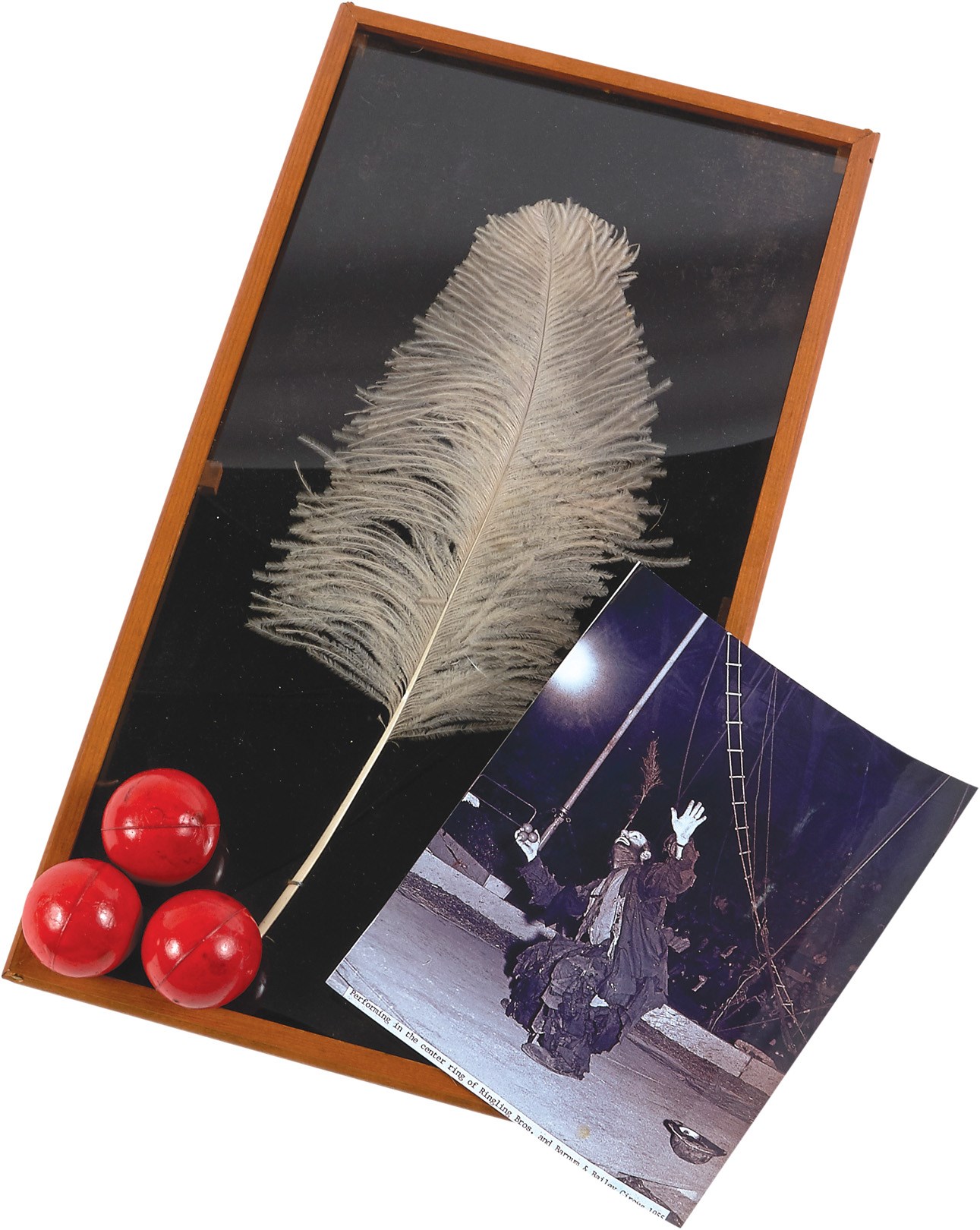 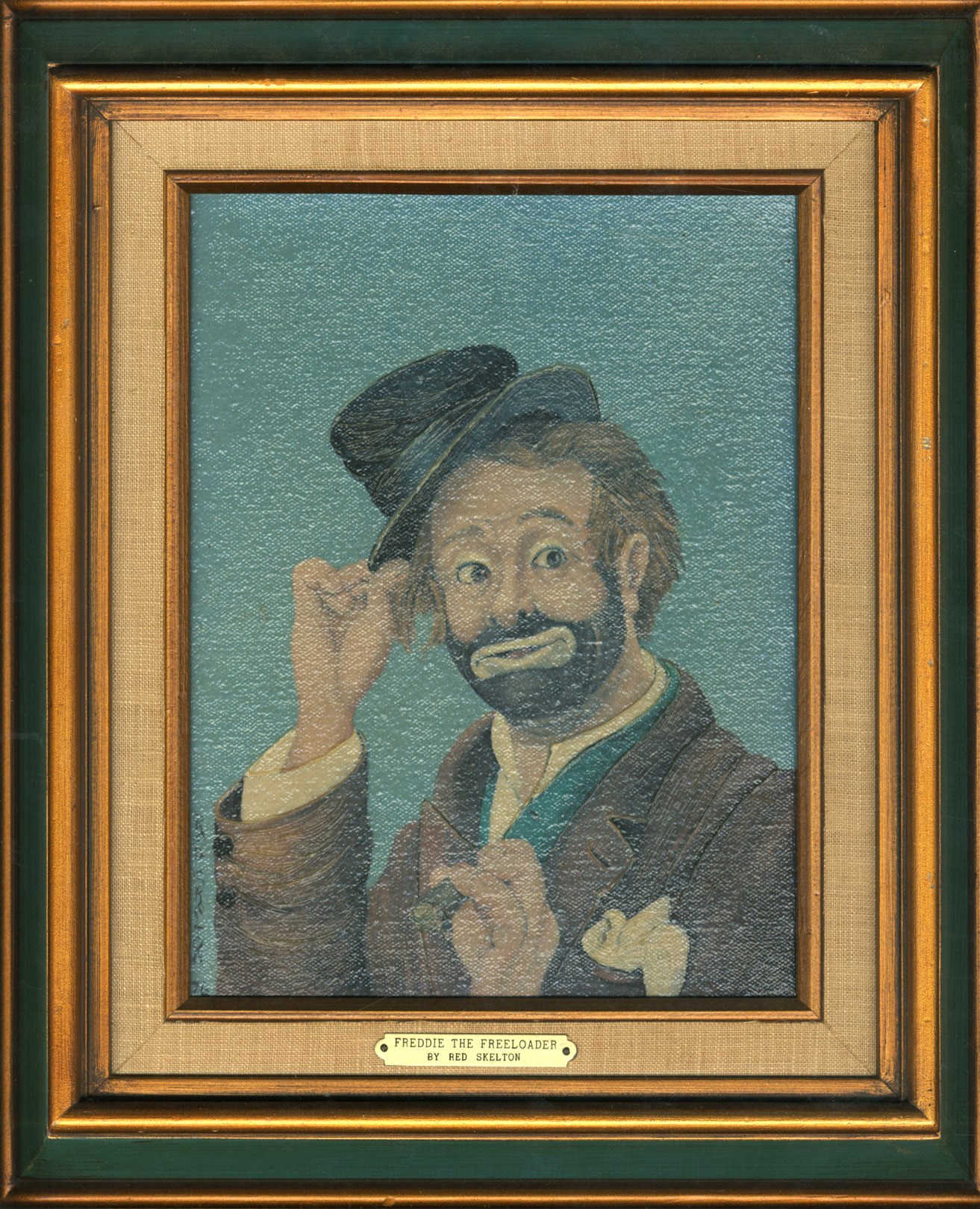 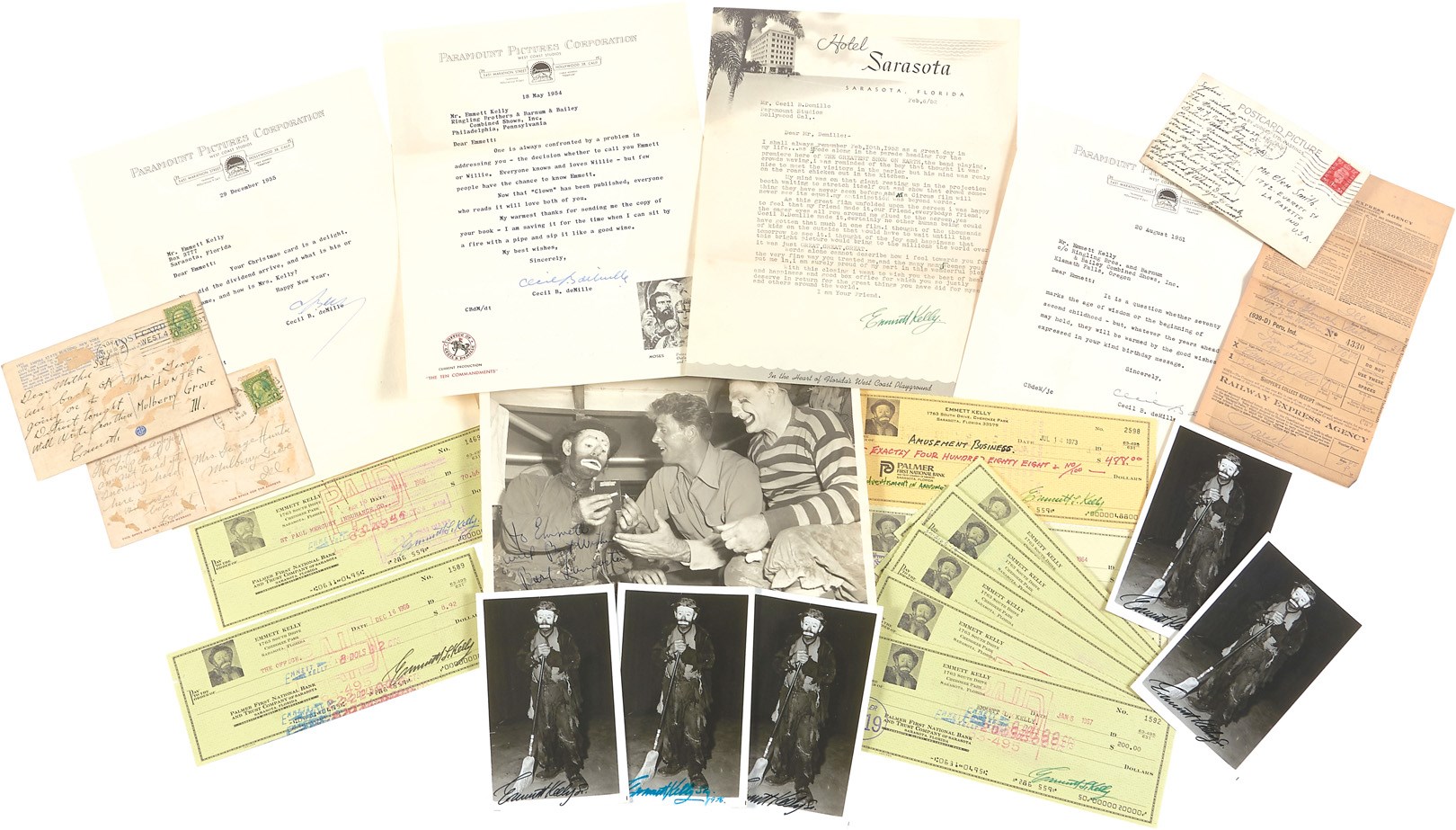