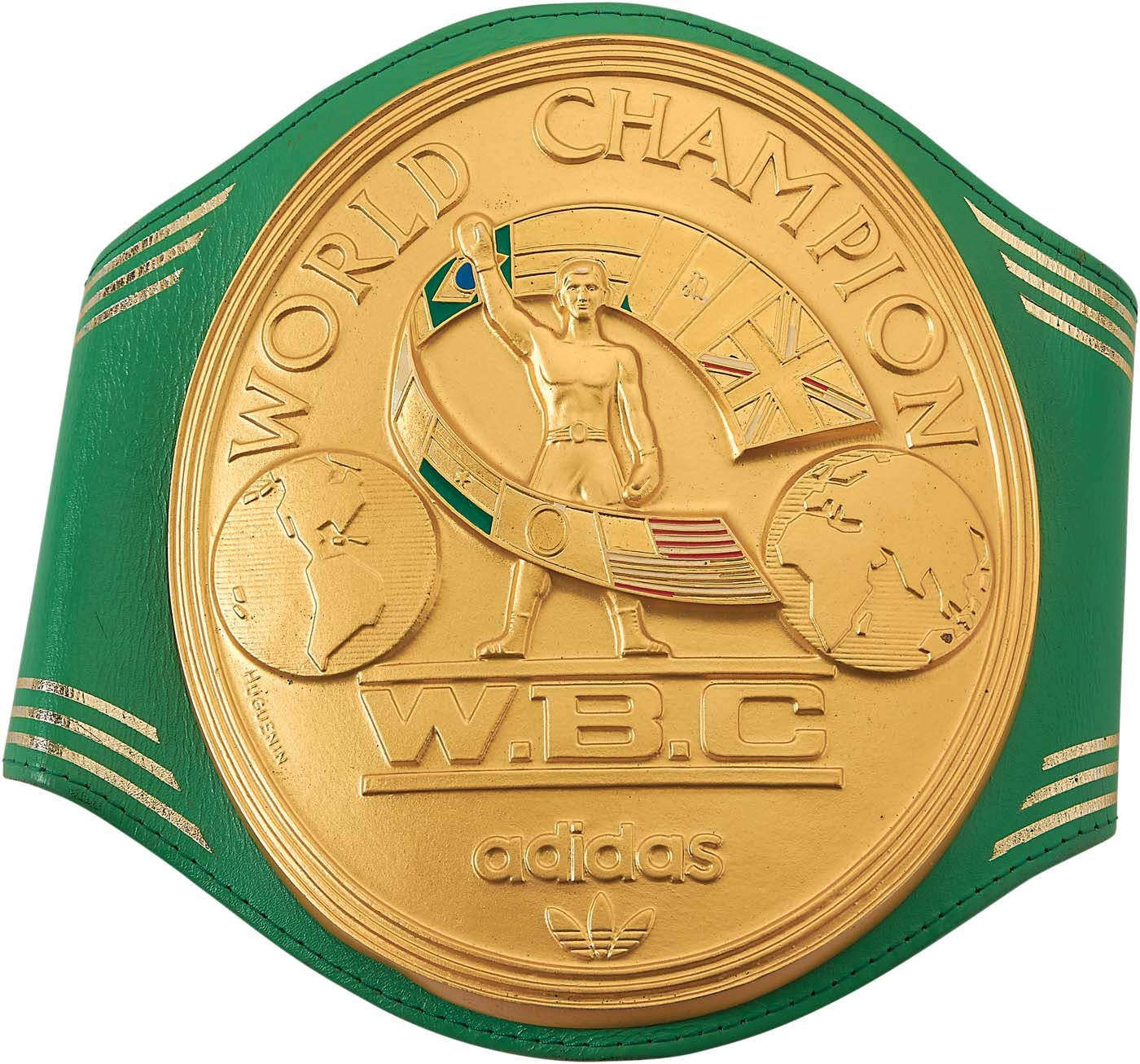 This is the actual WBC Championship Belt awarded to Muhammad Ali for his 1974 "Rumble in the Jungle" victory over George Foreman in Zaire, Africa. In a masterpiece of boxing strategy for the ages, challenger Ali dodged and covered up on the ropes, forcing hard-hitting champ Foreman to expend tremendous energy. Using his "rope-a-dope," Ali was able to rally to score an eighth-round knockout victory in one of the greatest bouts of all time. This is the original belt awarded to Ali in 1976 by the World Boxing Council (WBC), which in that year began the practice of giving out its championship green belts and stopped in 1978, before the later version with black lines replaced it. It is estimated that roughly 20 belts in total were produced and given to World Champions with other notables being Ken Norton and Roberto Duran. The leather belt, manufactured in France and designed by Huguerin, was sponsored by Adidas and their name was featured on the center plate. Research shows Ali wearing his green WBC belt following his victory over Richard Dunn on May 24th, 1976, with a DVD included. There's a large oval, gold color center plate flanked by two smaller plates on either side, and the center plate reads "World Champion W.B.C Adidas" with a human figure draped in flags with continents of the world on either side, and designer "Huguerin" in the center plate on bottom left. Unique features include: gold lines on the perimeter and the belt closes on the fighter's side, not the back; length of the belt is appx. 41" long, width at widest point is 8" and smallest is 3.5" This piece sources from an unpaid storage locker of Drew Bundini that was sold in 1988 by Sartain Co. Auctioneers of Ventura, CA and comes with LOA signed by the original purchaser of the locker. According to our boxing expert, Craig Hamilton, there is another Muhammad Ali WBC belt in a museum that is similar to this one presented, however the authenticity on that belt has not been confirmed by Hamilton. Lot comes with an additional 4-page detailed LOA from Craig Hamilton.