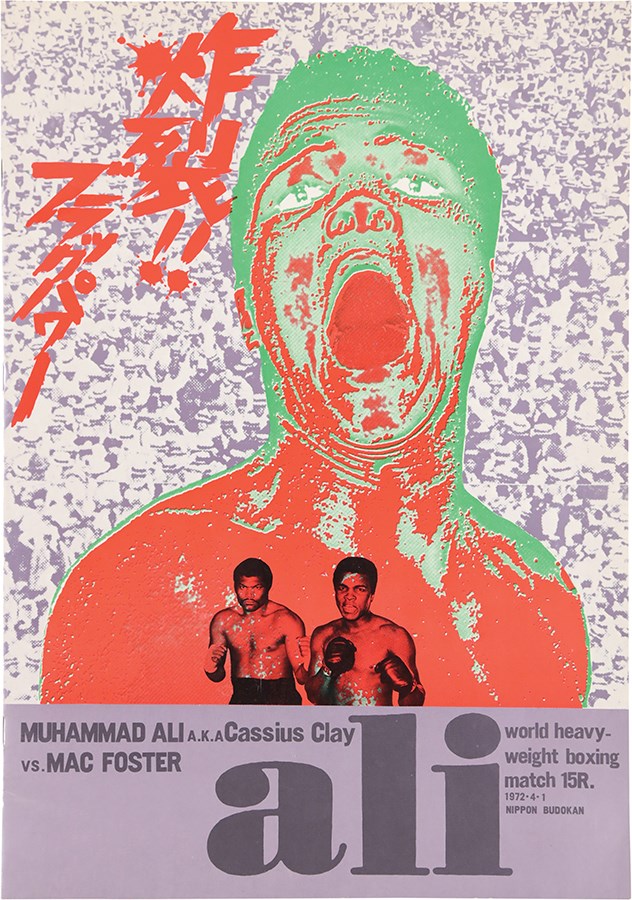 <p>Muhammed Ali, the former World Heavyweight Champion, pressed onward in his comeback as he won this 15-round match in a unanimous decision on points after the fight lasted the scheduled 15 rounds. Held on April 1, 1972, the battle was no April Fool's Day for Ali as he easily defeated Foster at Nippon Budokan, Tokyo, Japan. Ali came into the fight ranked #1 and Foster #9, and the contest was the first time two top-ten ranked fighters had ever fought in Asia. Ali came into the non-title fight at 226 lbs. and Foster at 211.75 lbs. The program is oversized at 11.75" x 16.75", and its cover features intriguing, large, psychedelic green and orange artwork as Ali seems to be screaming his power to the world. The cover also exhibits smaller photos of Ali and Mac Foster. The program is in Good overall condition, but the cover does show some creases, folds and a few scratches. The 24-page program is mostly written in Japanese, but does have some English, including the reproduction of a handwritten letter from Ali. Always a showman, Ali entered the ring carrying the large round card of Round 5, referencing his pre-fight prediction that Foster would be knocked out in the 5th. Round. Ali tried hard to finish Foster off in the 5th round, but Foster did go the distance. This original on-site program is very rare in any condition.</p>