Rich collection of thirteen (13) Presidential autographs includes: 1. six (6) typed signed letters from John F. Kennedy - 1953, ‘54, ’55 (3), & ’56. Three of those are signed with full name, “John Kennedy” and the rest, “John”, or “Jack.” 2. two (2) typed signed letters from Harry Truman - August 6, 1965 (framed), and 1970 (unframed). Both are typed on Harry S. Truman, Independence Missouri letterhead. Signed in black fountain ink and ballpoint, grading 9-10 out of a possible 10. Both letters are Near Mint with original mailing folds. 3. Harry Truman signed color print (9x12”). Signed, “To Mark Barry from Harry Truman.” 4. Bound Amherst Address, delivered by John F. Kennedy on Oct. 26, 1963. Dedication printed on the front fly reads, “This book was to be a gift for the late President. Now it is more than that: it is a tribute to his memory. We have decided to dedicate our book to Mrs. Jacqueline Bouvier Kennedy.” Included letter from Goodspeed’s Book Shop (Boston, MA) is acting COA and states that the book was purchased from Amherst College in 1963, a protective case custom bound to house the address. 5. Ted Kennedy and Robert Kennedy signed 8x10” black and white photos. 5. Joseph Kennedy signed letter, 1926. Signatures in this lot grade from 7-10 out of a possible 10, with most grading closer to the upper end. Letters and photos grade overall EX-MT to NRMT, although a few of the JFK letters grade EX. 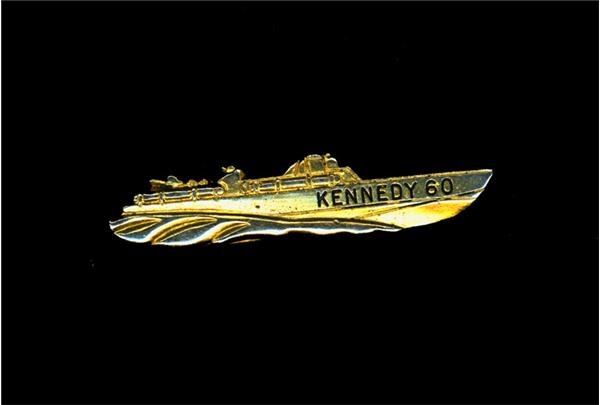