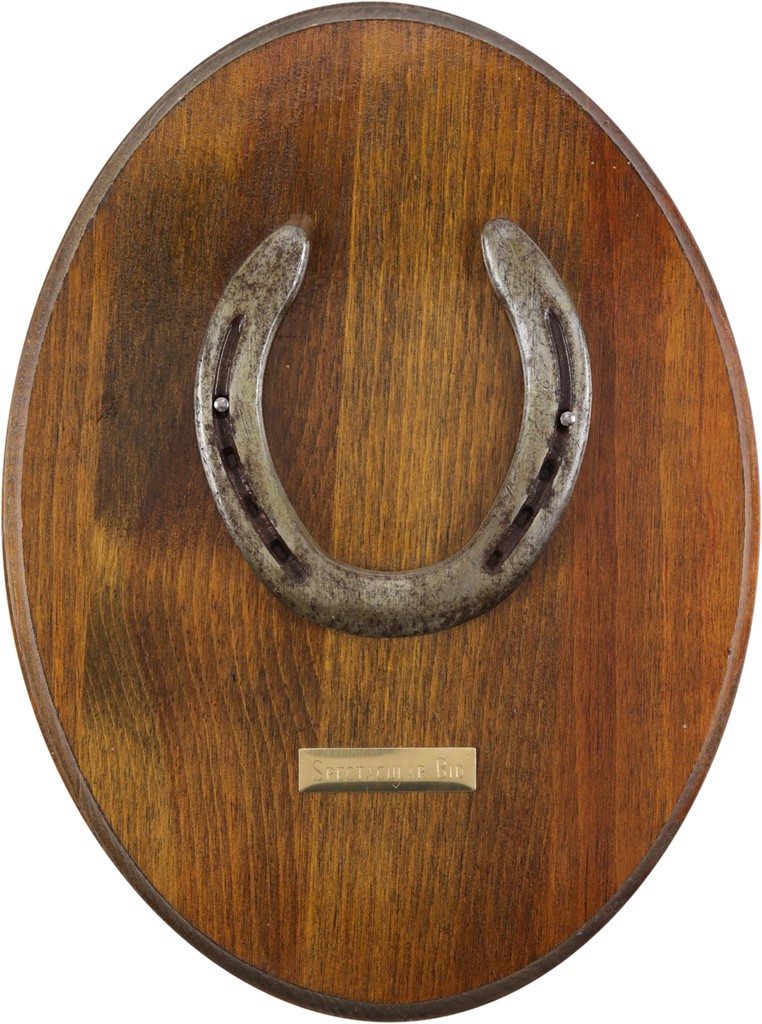 His authentic horse shoe was worn by the great Spectacular Bid. Affectionately known as "The Bid" and considered one of Thoroughbred racing's superstars, Spectacular Bid won 26 of 30 races from 1978 through 1980, set several track records and earned $2,781,607, a then-record sum, while winning Eclipse Awards in each of his three seasons.In 1978, Spectacular Bid was the Champion American 2 Year Old, recognizing his victories in the prestigious Champagne Stakes and Laurel Futurity. In 1979, his wins included the Kentucky Derby and the Preakness Stakes. Entering the Belmont Stakes, he built up a run of 12 consecutive victories, however his attempt at winning the Triple Crown disappointed as he sustained a stunning defeat in the final classic, largely attributed to an infection from stepping on a safety pin just days prior to the race. He then recovered to win the Marlboro Cup to confirm his status as the best American colt of his generation. In 1980, racing as a 4 year old, Spectacular Bid was undefeated in nine races. His reputation was such that he won the Woodward Stakes in a "walk-over" when no other competitors elected to enter in the race! Spectacular Bid was named Older Champion as well as Horse of the Year and was elected to the National Museum of Racing's Hall of Fame in 1982.Spectacular Bid was syndicated for $22 million, standing at Claiborne Farm until 1991, when he was moved to New York&rsquo;s Milfer Farm in Unadilla, New York, where he died from a heart attack in 2003, 24 years to the day of his heartbreaking loss in the Belmont Stakes.The shoe is a heavy steel stallion plate emanating from the personal collection of noted equine photographer Barbara Livingston. It is mounted on a 9&rdquo; x 12&rdquo; oval wooden plaque bearing the nameplate &ldquo;Spectacular Bid&rdquo; and was a gift to Ms. Livingston from Milfer Farm in the autumn of 1995 when the 19-year old champion was residing there. The shoe is accompanied by a certificate of authenticity.