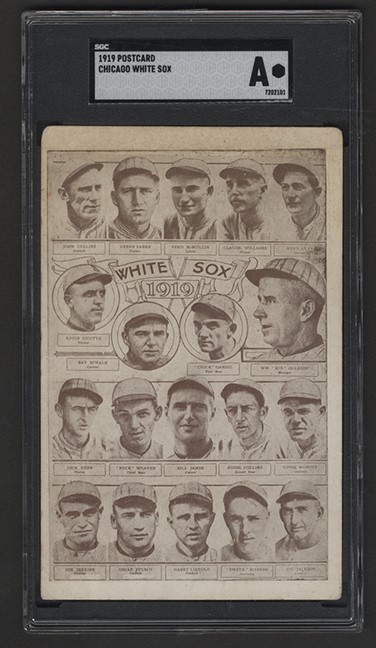 One century after the biggest controversy in baseball history, intrigue and doubt still surrounds the 1919 Black Sox scandal. This rare postcard front features portrait images of nineteen team members of the Chicago White Sox, including all eight conspirators: Joe Jackson, Swede Risberg, Hap Felsch, Buck Weaver, Chick Gandil, Eddie Cicotte, Lefty Williams and Fred McMullin. The remaining players pictured are Kid Gleason, Ray Schalk, Dick Kerr, Eddie Collins, Urban Faber, John Collins, Byrd Lynn, Eddie Murphy, Bill James, Joe Jenkins, and Harry Leibold. This is a particularly interesting and significant card as this may represent the only team card issued of the infamous "Black Sox" and very few have surfaced. SGC has authenticated and encapsulated the card, which has a Very Good appearance but there is very light glue residue/paper loss at the top border, so it was not given a numerical grade. This is, however, one of the nicest appearing examples that we know of. Eight members of that White Sox team were accused of throwing that 1919 World Series and were banned from baseball for life - including Hall of Fame consideration - by new Commissioner Kenesaw Mountain Landis. To this day, questions remain about the level of complicity of those players, most significantly, "Shoeless" Joe Jackson. A timely artifact, extremely rare and in splendid condition, make this a potential cornerstone of the collection of the winning bidder.