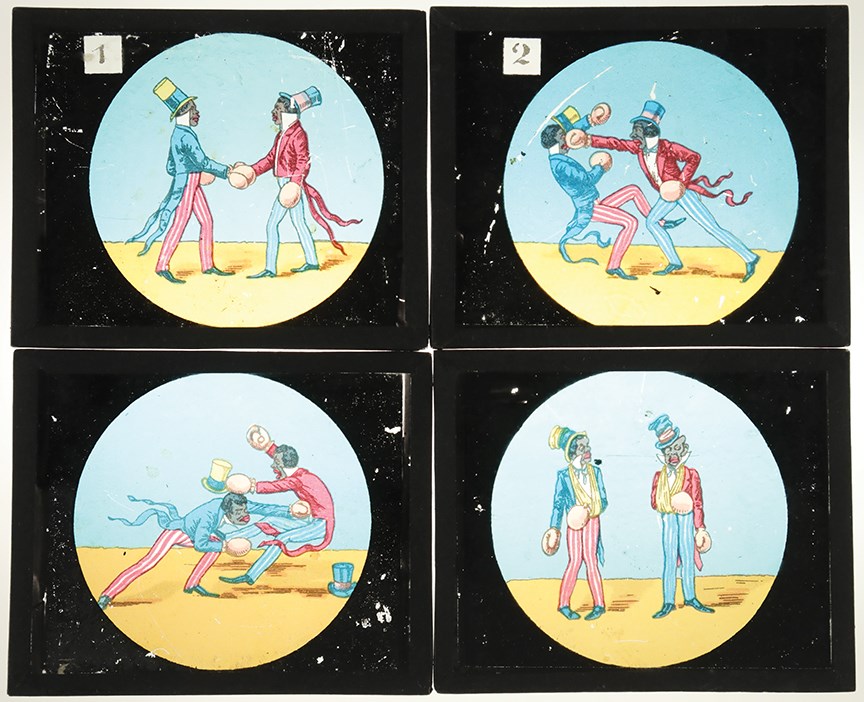 Presented is an item containing four lantern slides of African American boxers, a fascinating item of early 1900s Americana. Lantern slides had their beginning in the Seventeenth Century as slides produced for the "Magic Lantern." The offered slides are the standard American size, at 3.25x4". Slides such as these were made from drawings that were then photographed in black and white and then hand painted in color. These wonderfully colored slides tell a humorous story in just four slides. The first slide depicts the two boxers shaking hands before an apparently informal fight, sizing each other hope and showing confidence. In the second slide, the boxer in the red jacket has the better of it, with the fighter in the blue pants being knocked about. In the third slide, fortunes have reversed, as the fighter in the blue jacket is pummeling the other boxer. In the final slide, the chagrined boxers are shown after the fight, both disheveled, bandaged, and beaten up, signaling that the fight must have been a draw. None of the injuries appears serious, and the slides send a message that the fight was all in vain, leaving both men somewhat the worse for wear. The slides exhibit some scratching, and some minor loss of paint. The small numbers that identify the order of the slides are missing from slides 3 and 4. despite the aforementioned minor defects, considering that the slides are over a hundred years old, they show surprisingly good condition. Overall, the slides present a fine opportunity to possess an outstanding piece of colorfully artistic, vintage Americana.