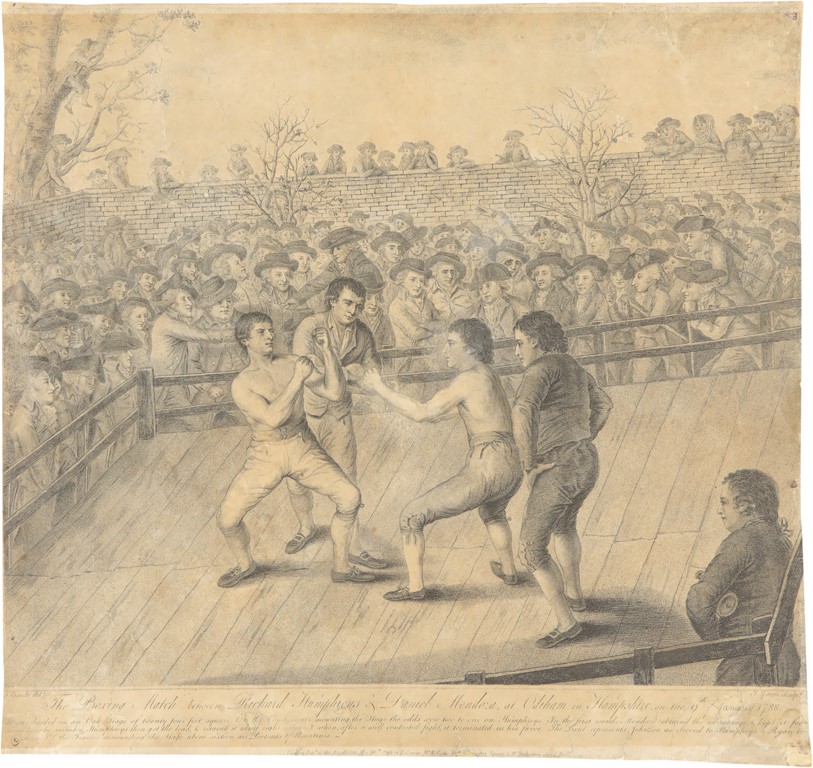 <p>Only specimen we can find of this is in the British Museum, the three fights versus Humphries are legendary. The boxing match between Richard Humphries and Daniel Mendoza at Old Ham in New Hampshire on the 9th of January 1788. Some restoration done in the 19th century and was framed in 1898. We took it out of framing, was mounted on heavy paper (still is) as well. Signed J Grozer sculpt, unable to make out writing at the bottom, especially the publisher. These prints are almost always fake, yet this is a genuine 18th century original. Mendoza and Humphries fought a terrific three-fight series. In this first fight, in January 1788, the ring was wet and Mendoza slipped and injured his ankle he was unable to continue and lost the championship bout. In the second fight between the two, Mendoza, only 5'7" and 160 pounds, small even for that time, used superior movement and cunning to defeat Humphries and claim the British Championship. In 1790, Mendoza won the rubber match. Great Jewish boxer single-handedly changed the stereotypical perception of Jews as weak. First Jewish person to shake the King's hand (George III).</p><p><em><strong>Addendum from noted boxing historian Tony Gee:</strong>The British Museum one is not the only example of this print in the public domain, the Jewish Museum, in London, for example, having one also.The fight took place at &ldquo;Odiham, in Hampshire&rdquo; (Morning Post 10 January 1788), not &ldquo;Old Ham in New Hampshire&rdquo;.This print was published on 16 May 1788 by J Grozer (as noted on the print itself).Re this first fight between the two, Mendoza did not lose the &ldquo;championship bout&rdquo;, nor, in fact, did he &ldquo;claim the British Championship&rdquo; by winning the second. The title was, at that time, known as the 'Championship of England', and it was held by Tom Johnson.With regard to Mendoza shaking George III's hand, Mendoza himself did not claim this, but instead, in his memoirs, made a mention of a &ldquo;long conversation&rdquo; with the king at Windsor. Paul Magriel, in his introduction to the 1951 edition of the memoirs, then claimed that &ldquo;no Jew had ever spoken to the king before&rdquo;.</em></p>