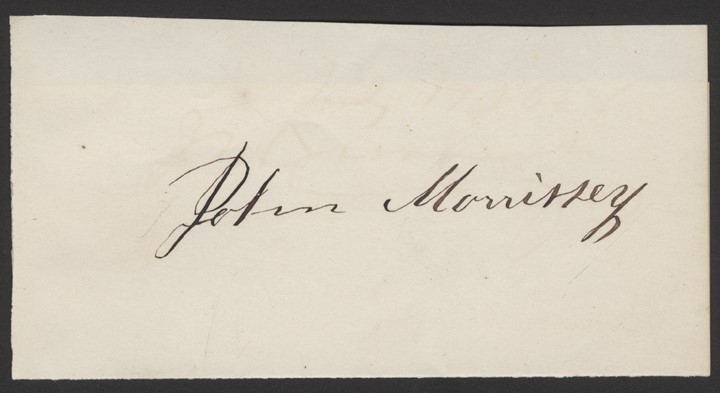 <p>John Morrissey was born in Templemore, Ireland on February 5, 1831. His professional fighting career commenced on August 21, 1852 with an 11-round victory by disqualification over George Thompson. Morrissey claimed to be the Heavyweight Champion of America after that victory and went on to post wins over Yankee Sullivan and John C. Heenan during a short career which spanned only four fights. He died at age 47 on May 1, 1878. Presented here is a rare ink cut signature of John Morrissey in fountain pen on paper measuring 2 1/2" x 4 3/4". Clean with bold signature. LOA from JSA.</p><p><em><strong>Addendum from noted boxing historian Tony Gee:</strong>Re Morrissey's birth date, it is probably best to just put the month and the year (February 1831), rather than state the actual day, as although some contemporary sources did give the 5th, others gave the 12th. (For instance, obituaries in The Sun , New York, and the Chicago Tribune.)</em></p><p><em>It is generally accepted that Morrissey only had three 'official' contests in the prize-ring (namely George Thompson, Yankee Sullivan, and John C. Heenan), not four. Any other fights were either turn-ups or 'rough and tumble' ones. (The New York Herald of 22 October 1858, in its report of Morrissey's last fight, against Heenan, for instance, just mentioned the Thompson and Sullivan contests as actual prize fights, whilst the extensive biographical details in the obituary of Morrissey carried by the Chicago Daily Tribune of 2 May 1878 noted Thompson, Sullivan and Heenan.)</em></p><p><em>The contest between Morrissey and Thompson took place on 20 August 1852, not the 21st. (In the build up to the contest the Daily Alta Californa of 13 July 1852 stated that the &ldquo;fight is to take place on the 20th of August&rdquo;, and thereafter the Weekly Alta California of 21 August 1852 reported it occurred &ldquo;yesterday&rdquo;. Another Californian newspaper, theDaily Union, Sacramento, of 23 August 1852, carried a report with the date line of two days earlier which also stated &ldquo;yesterday&rdquo;.)</em></p><p><em>Thompson was just recognized as champion of California, and it was Morrissey's victory over Yankee Sullivan which gave him the claim to the Championship of America. (See The Champions of the American Prize Ring by William E. Harding and the Morrissey entry in the Dictionary of American Biography, vol. XIII, edited by Dumas Malone. N.B. The title, at the time, was still mostly referred to as 'Championship of America', as it was open to all-comers and the term 'heavyweight' was not much used then, so you could put '(Heavyweight) Championship of America', rather than &ldquo;Heavyweight Championship of America&rdquo;.)</em></p>