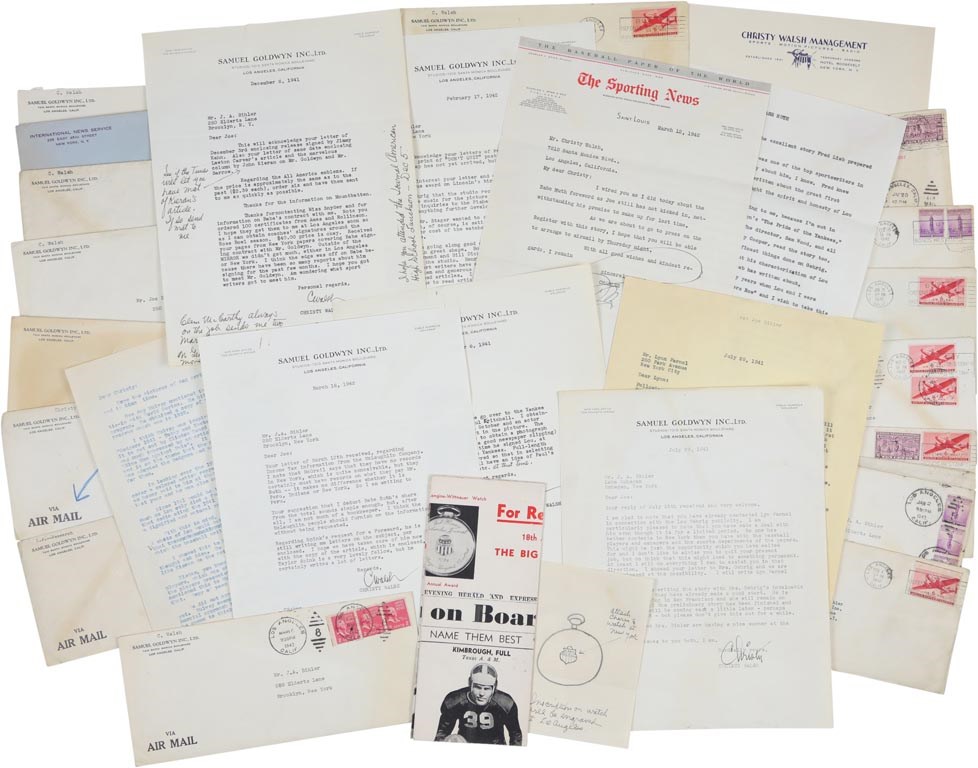 <p>Great trove of Christy Walsh correspondence. Christy Walsh was Babe Ruth's right-hand man for the Big Man's greatest years for the New York Yankees. A man ahead of his time, Walsh was really Ruth's agent before that term became in use, and before baseball players really had agents. Not only was Walsh a press agent for Ruth, he was also his financial manager, personal advisor, and advertising agent for him as well. Walsh handled everything for Ruth: endorsements, income tax, marital situations, publicity, barnstorming tours, etc. Walsh had close connections with Hollywood, especially through Samuel Goldwyn, and Walsh was involved in numerous motion pictures, particularly those involving athletes or coaches, such as Ruth, Gehrig, and Knute Rockne. In the recent new biography of Ruth, called "Big Fella," by Jane Leavy, Christy Walsh is prominently featured, with numerous passages detailing his myriad personal and business connections with Ruth. Twelve original letters from Walsh are signed. In addition, two original envelopes are signed by Walsh, and another envelope has a Walsh signed note with it. There is movie mogul Samuel Goldwin stationery and notes from his office, some are copies. Also, a 6-day bicycle race poster telegram. Some of the letters are to Samuel Goldwyn. Some letters involve Leila Alexander, important assistant to Samuel Goldwyn. Letters: John McGraw biography picture. Walsh sitting with Ruth, Dickey and Goldwyn. Lou Gehrig "Pride of the Yankees" comic book. Correspondence involves All-Americans watches with sketch and press brochure. Another letter concerns a Babe Ruth cocktail party. Letter specifying that Mrs. Gehrig and Babe Ruth and Spalding split is 75/25. Letter mentioning Babe Ruth and Mrs. Gehrig. Baseball magazine asking for Gehrig photo. Lou Gehrig Yankee contract with publicity on "Pride of the Yankees," Ed Barrow. Ruth's share of the income tax. Christy Walsh blank stationery. Letter concerning actor to play Paul Kritchell, the scout who signed Gehrig, in "Pride of the Yankees." Another letter details Mrs. Gehrig's valuable assistance with the Gehrig picture and former Yankee catching star Bill Dickey winning the hearts of the film crew. Charles Spink letter regarding a Babe Ruth book forward. Ruth's signing for picture with lengthy photos. Some of the letters are in good condition. Other letters have faded and are brittle with age. Envelopes are in generally good condition. A few notes are separated because of the letter paper's age. Overall condition of this correspondence is Good. This collection is a wonderful peek behind the curtain of big time sports, Babe Ruth and Lou Gehrig, Hollywood movies, and the work of Christy Walsh, the first big time agent in the history of sports.</p><p>&nbsp;</p><p><span style="font-size: 13px;">T</span><span style="font-size: 13px;">his collection is originally from Babe Ruth&rsquo;s right hand man: Mr. Joe Bihler. Bihler handled personally the Babe Ruth account for christy Walsh, Babe Ruth&rsquo;s legendary agent. Bihler &amp; Walsh took loving care of the Babe from the peak of his playing career, till his final years.&nbsp;</span><br style="font-size: 13.3333px;"><span style="font-size: 13px;">Along with their #1 client Babe Ruth, Walsh &amp; Bihler represented most of the major sports legends over their careers including lou Gehrig, ty cobb, Knute Rockne, John McGraw and many more in a myriad of different sports. These important documents are fascinating look into the life and times of George Herman &ldquo;Babe&rdquo; Ruth. they include several of his income tax returns, income notes from his banner 1927 year showing great detail of his earnings, a telegram from a racist police chief, and a great letter Ruth sent to the IRS regarding a deduction he made for his wife acting as his secretary.&nbsp;</span></p> 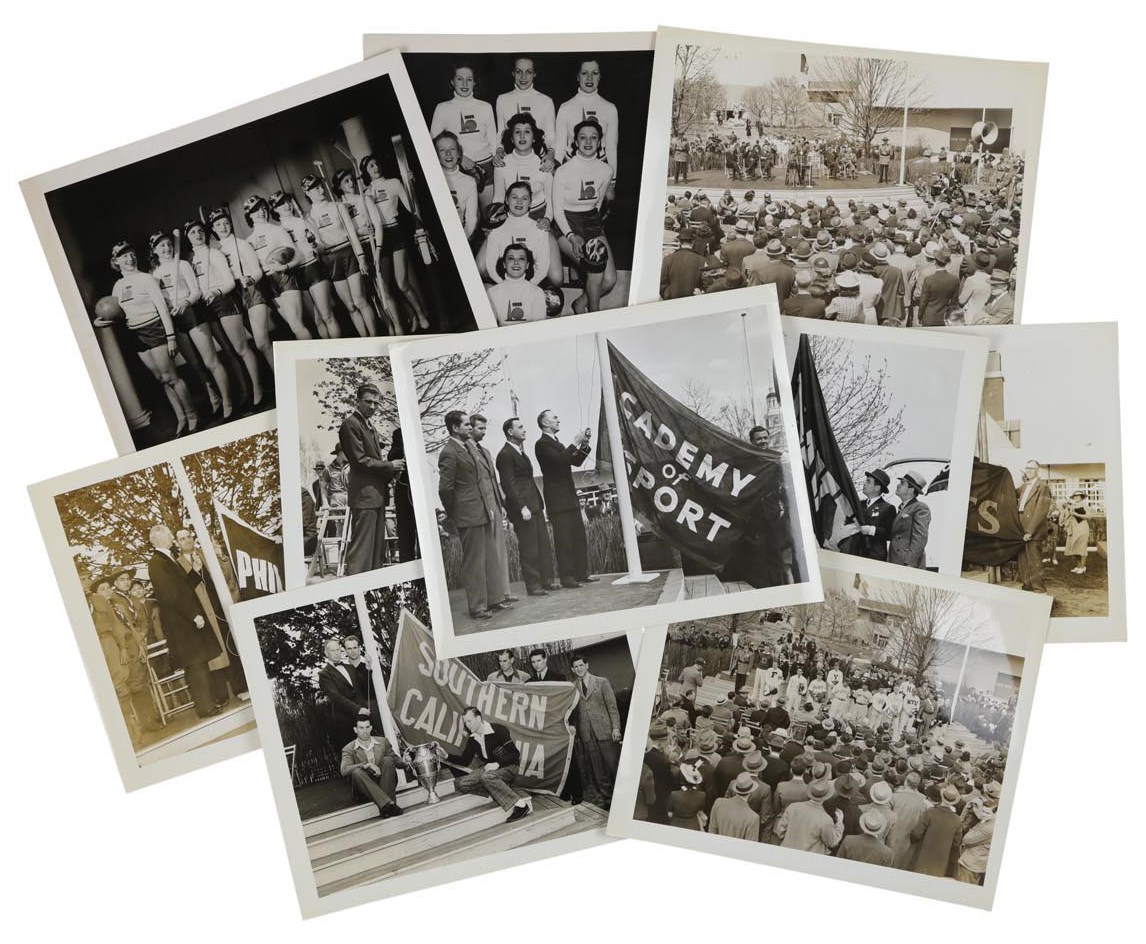 Fascinating 1921-38 Document "How Babe Ruth Made His Money" 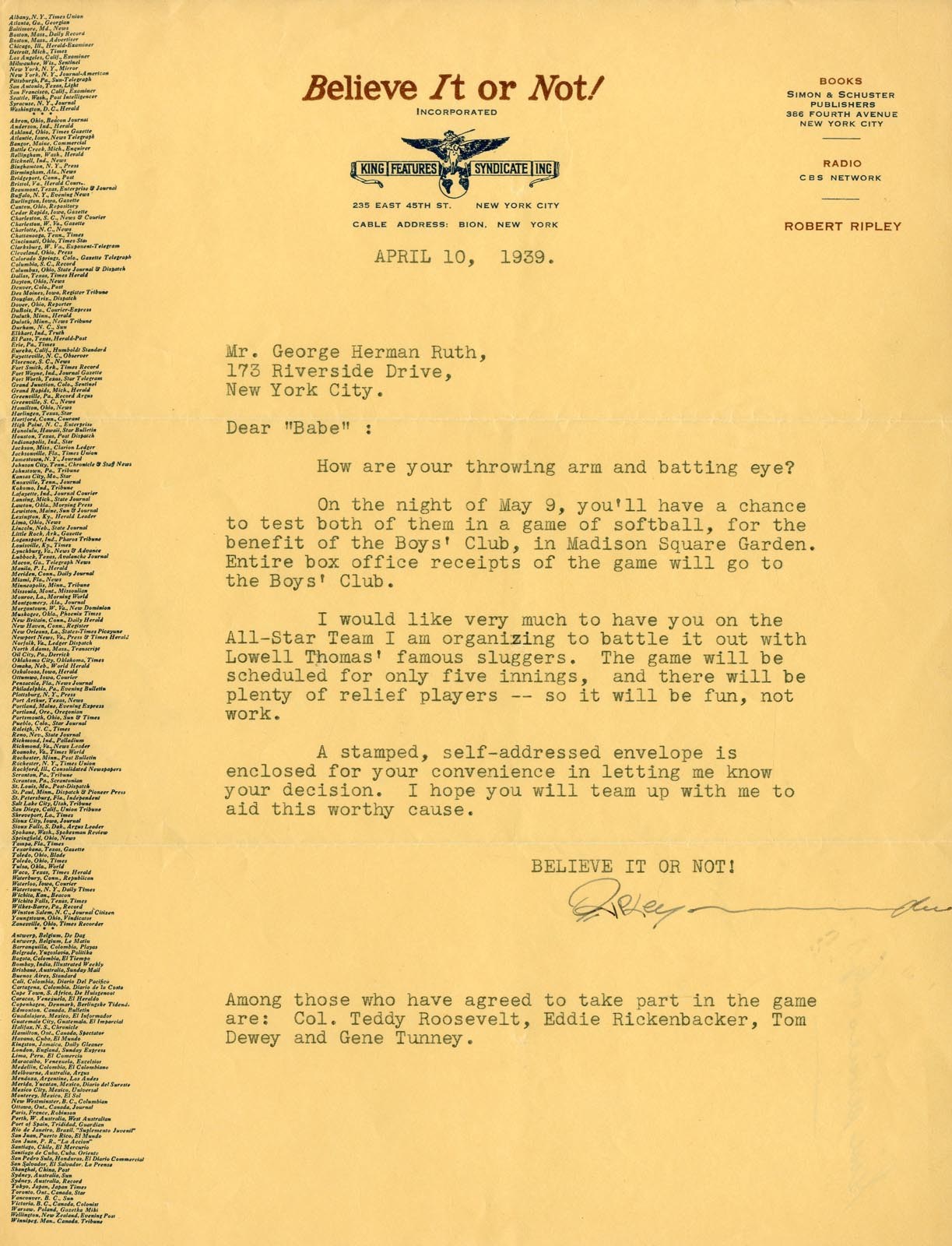 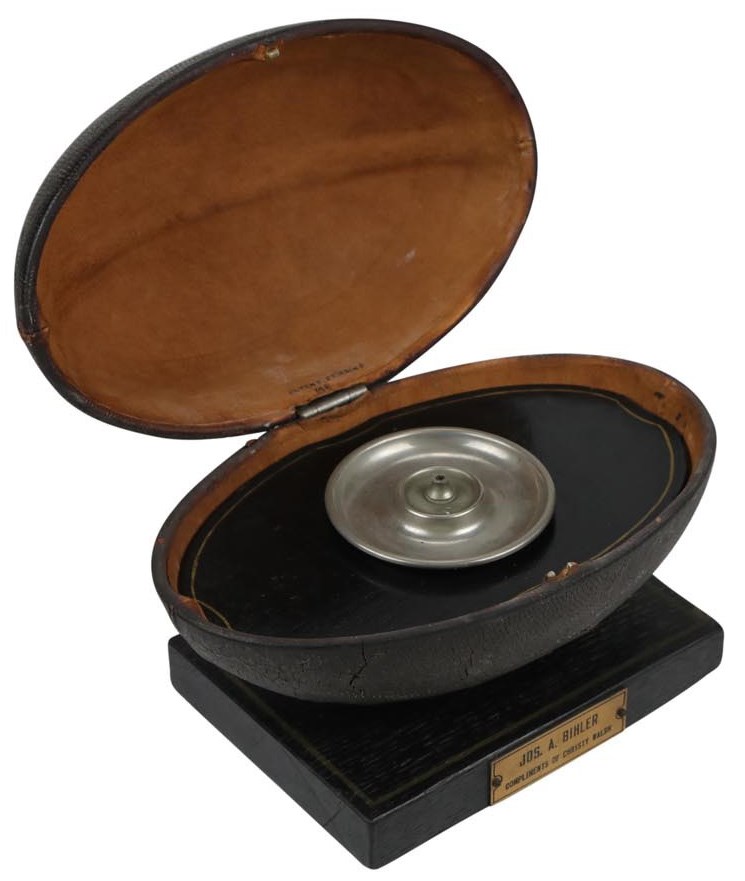 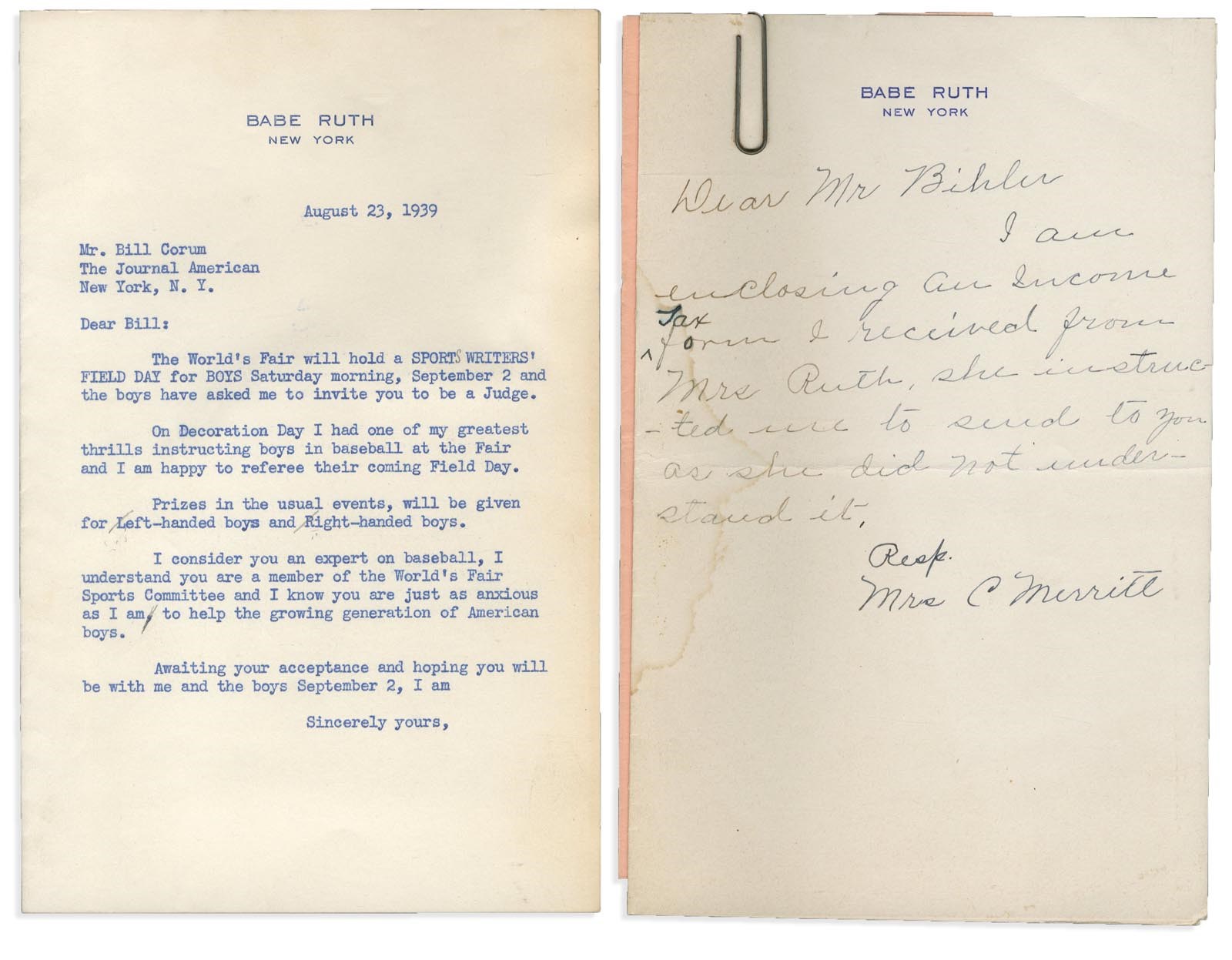 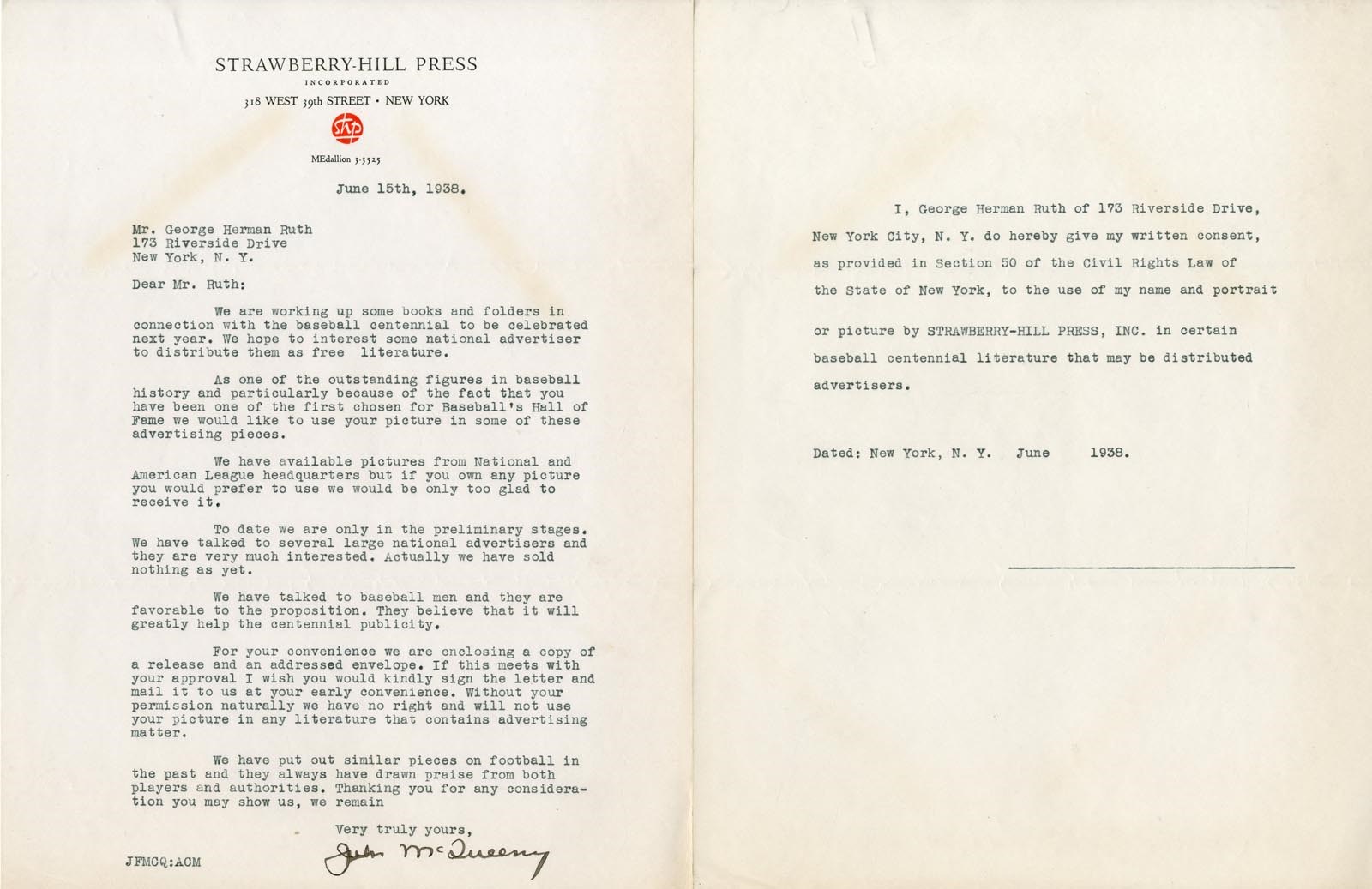